“To his innocent victims, he is the face of Terror, Inc. As head of the Islamic Revolutionary Guards Corps-Quds Force (IRGC-QF), Qassem Suleimani is Iran’s top terrorist,” Kenneth Timmerman wrote in an analysis report published by The Washington Times last week.

Timmerman also called on the United States President Donald Trump to take further steps against Suleimani including the blocking of his assets, punishing business that interact with him or the IRGC as well as formally designating the IRGC and the Quds Force as international terrorist organizations. 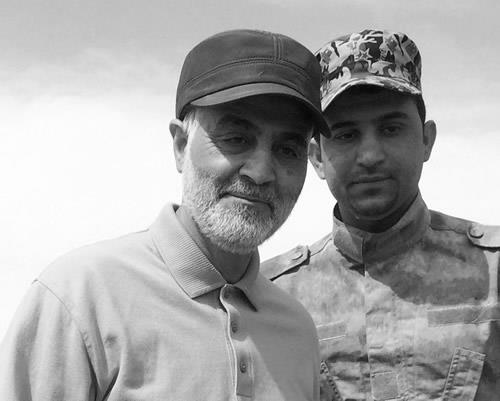 Iranian Revolutionary Guard Commander Qassem Soleimani (L) stands at the frontline during offensive operations against Islamic State militants in the town of Tal Ksaiba in Salahuddin in 2015. (File photo: Reuters)

“As an immediate step, the Trump administration should follow through on hints that it is contemplating designating the IRGC and the Quds Force as international terrorist organizations… The crimes of Qassem Suleimani are many. After Osama bin Laden, he has more American blood on his hand than any terrorist. It’s time we shut him down for good,” Timmerman wrote.

The commander of the Quds Force has been accused of personally participating in the war in Syria, through leading the Islamic Revolutionary Guard Corps, Hezbollah and Iraqi militias there. He also supervised and participated in many battles, namely in Qussair, Latakkia, Aleppo and many other regions.

He has sent 70,000 from Iraq, Afghanistan, Pakistan and Lebanon to Syria.