Protests in the US, Turkey and Italy

Demonstrations in various cities around the world still continue, condemning the atrocities committed by the Assad regime, and its allied militiamen. One such protests took place in front of the White House in Washington D.C. Protesters chanted slogans against the Assad regime and its foreign militiamen.
In Turkey, thousands of activists and members of civil society groups, and residents of the town of “Bab al Hawa”, on the Syrian border, demonstrated in solidarity with Aleppo residents.
The city of Bremen in Northern Italy was also the scene of popular demonstrations. Protesters carried banners saying: “Aleppo is burning in fire, and humanity is dying”. “Save Aleppo”. “Aleppo is in Syria, but its sufferings are felt everywhere”. “Stop this criminal massacre”. 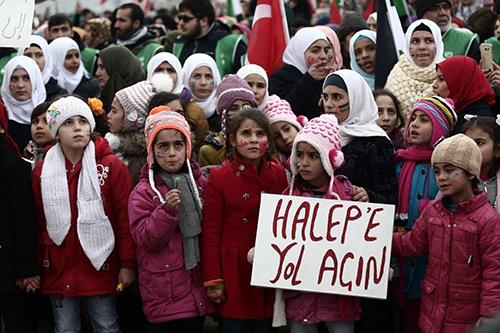