Conference on Human Rights Abuses in Iran and EU Policy

On the eve of the Human Rights Day, European lawmakers held a conference at the European Parliament on Wednesday 7 December. They strongly condemned the violations of human rights in Iran and urged the EU High Representative, Federica Mogherini, and the Member States to condition the expansion of relationships with Iran to a halt of executions.
This meeting was held at the initiative of the Friends of a Free Iran intergroup at the European Parliament, which has the support of some 300 MEPs from different political groups. 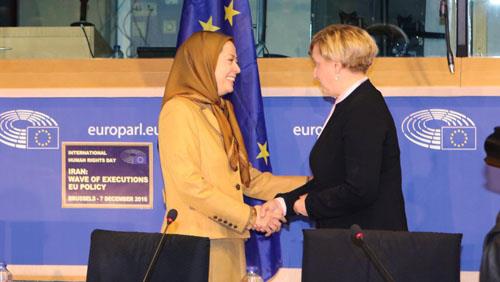 The keynote speaker was the Iranian opposition leader, Maryam Rajavi who heads the National Council of Resistance of Iran (NCRI). She was joined by the former Italian Foreign Minister Giulio Terzi as well as a young female former political prisoner, Shabnam Madadzadeh, 29, who spent 5 years in prison and has recently managed to leave Iran.
Around a dozen MEPs also spoke and emphasized:
“Human rights conditions in Iran have not improved under Hassan Rouhani but further deteriorated with a surging number of executions. It is a dangerous mistake to compare the Iranian regime with other dictatorships. Negotiating with this regime on human rights only emboldens it to commit more crimes. Engagement in trade and political relations with a regime that holds the world's record of per capita executions infringes all human rights standards. In September, October and November 2016, some 200 people were executed in Iran.” 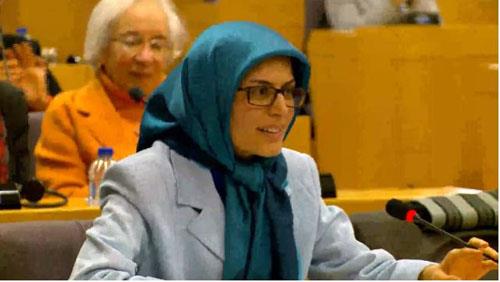 “The massacre of 30,000 political prisoners in 1988, mainly from PMOI/MEK, is one of the biggest crimes against humanity since WW II. This massacre has been registered as a crime against humanity by international human rights authorities, and the world's silence on it contributed to its prolongation. Those responsible are still holding a key position in Iran. The current minister of Justice in Rouhani’s cabinet was a member of ‘Death Commission’ which was personally responsible for thousands of executions. It is a shame and totally unacceptable for the free world and in this case EU to remain silent and continue business as usual with such a regime. The first step for EU would be to list Rouhani’s Minister of justice as a violator of human rights and impose certain sanctions on him.” 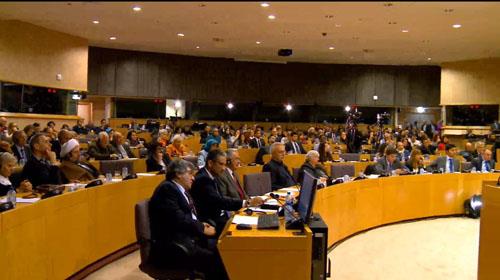 “Silence from the international community and EU emboldens this theocratic regime to commit more atrocities and become more aggressive and arrogant. They have gone so far that even the head of Iranian Judiciary’s so-called Human Rights Council, Javad Larijani, has recently written an open letter to High Representative Mogherini,  calling for a restriction on the freedom of activities of the Iranian opposition PMOI here in Europe. He explicitly tells Europe that the death penalty is the regime's ‘red line’ and they cannot budge on it. Larijani's letter further reveals the regime's vulnerability and a deep fear of the Iranian Resistance under the leadership of Mrs. Rajavi.”
Calling on EU High Representative Federica Mogherini, MEPs stressed that we should not turn a blind eye on human rights violations in Iran in exchange for business. “We have not heard Ms. Mogherini condemning much the appalling human rights abuses in Iran. A state that does not respect human dignity can hardly become a trusted partner. EU should further condition its relation with Iran to a stop of executions.” 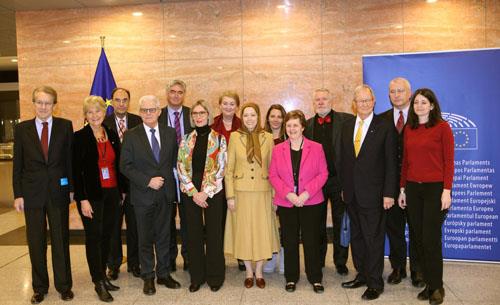 Iran is not the only place where the mullahs trample human rights. The carnages in Syria and Iraq are among the most horrendous violations of human rights which have been met with the silence of the European Union. So long as Iran’s Islamic Revolutionary Guards Corps (IRGC) and its mercenaries are in Iraq and Syria, engaged in killing the people of these countries, the region will not experience peace and tranquillity. The European Union must call for the eviction of the Iranian regime from the entire region.
Members of European Parliament also expressed their delight for the successful relocation of Camp Liberty residents to Europe, calling it a great victory. The plight of Iranian opposition members in Camps Ashraf and Liberty in Iraq has been the subject of numerous resolutions and statements in the European Parliament in recent years.