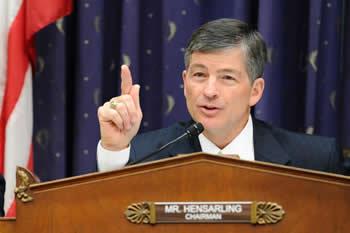 The legislative package, said Financial Services Chairman Rep. Jeb Hensarling, is "about taking every possible step to ensure that American-made aircraft are never used in pursuit of ending the lives of Americans or our allies."
At issue is the planned sale of $17 billion worth of commercial aircraft to Iran over the next decade, a transaction made possible by President Obama's Iran deal that was opposed by Republicans.
The politics of the sales have become heated, as congressional Republicans warned that Boeing would be effectively "weaponizing" the Iranian regime by, for example, providing them aircraft that could be used to transport terrorists to Middle Eastern hotspots. Democrats, in turn, have questioned Republicans' patriotism for working against the Iran deal.d national security issues in your
One bill, authored by Rep. Bill Huizenga, R-Mich., would prevent the treasury secretary from signing off on any financing related to the export of commercial aircraft to Iran.
Another, written by Reps. Peter Roskam, R-Ill., and Brad Sherman, D-Calif., would block the Export-Import Bank of the U.S. from aiding the financing of such sales.
Companion legislation has been introduced in the Senate by Marco Rubio of Florida.
In September, the Treasury approved Boeing's sale of 80 jetliners to Iran's state carrier, Iran Air, a purchase that is supposed to include planes such as the 747. The deal also includes 29 aircraft that Boeing will help source from other countries.
The sale would be the first of its kind since the 1970s. Airbus, which is based in France, has also won contracts to sell aircraft to Iran in the wake of the Iran nuclear deal.
The Treasury has said that the licenses provided for the sales include requirements that the planes be used only for commercial travel. Republicans have objected that Iran has in the past used commercial planes to transport military hardware to conflict zones such as Syria, or to transport members of the Islamic Revolutionary Guard Corps.