AFP, Nov. 1, 2016 - Two of China's secretive J-20 warplanes swept over a gasping crowd at the Zhuhai air show on Tuesday, potent symbols of Beijing's aspirations to military might.
The fighters were not announced on the schedule and appeared in the sky just after a colourful aerobatics show by the People's Liberation Army Air Force.
With no fanfare but an abrupt announcement by the master of ceremonies, the dark, powerful jets rumbled side by side over the sun-baked spectators. Two minutes later one blasted vertically into the sky and the jets were gone.
Swift and heavily armed, the warplanes represent a leap forward in China's ability to project power in Asia and compete in capabilities with the United States.
Beijing is seeking to modernise and upgrade its military both to protect its borders and project power into regions such as the South China Sea, a resource-rich strategic waterway where it has disputes with several neighbours. 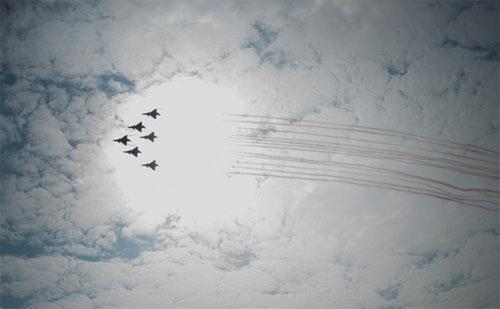 Air show, China's only international aerospace expo, serves as a stage for Beijing to flex its muscle before an audience of cheering citizens and foreign guests

This year's Zhuhai exhibition, the largest ever, features an array of new made-in-China military technology including assault vehicles, anti-aircraft missile systems, unmanned drones, and fighter jets.
China's only international aerospace expo, it serves as a stage for Beijing to flex its muscle before an audience of cheering citizens and foreign guests from 42 countries including Russia, Pakistan and Britain.
It also has become a key platform for top global aerospace firms to hawk their wares for a share of the booming aircraft market in the world's second-largest economy.
China is projected to become the world's largest aviation market by 2024, according to the International Air Transport Association.

Boeing and Airbus are in a heated competition to win Chinese customers for their aircraft, while homegrown national champions COMAC and AVIC aim to capture market share for Chinese firms.
President Xi Jinping has declared aerospace one of the target industries for his "Made in China 2025" plan to make the country's firms capable of dethroning foreign competitors in high-value manufacturing and services.
On Monday the president of China's state aerospace company AVIC -- maker of the J-20 jet -- said in Zhuhai that the firm had annual overseas earnings exceeding 80 billion yuan ($11.8 billion) and declared its "sacred mission" to serve the country, carry out the strategic plan of the Communist party, and "closely unite around the core leadership of comrade Xi Jinping".