They basically put a genie back in its bottle.

‎Engadget .com, Oct. 18, 2016 - Science has a long and storied history of looking for one thing but finding something better instead. Penicillin, radioactivity, science boxes...I mean microwave ovens -- all of these discoveries came in the the search for something else. On Monday, researchers at the Oak Ridge National Laboratory in Tennessee announced that they too had unintentionally discovered something incredible: a means of transforming carbon dioxide directly into ethanol using a single catalyst

The team was already looking for a way to convert C02 into ethanol but were convinced that doing so would require multiple steps and catalysts. Turns out they were wrong. The system is surprisingly simple. The team created a tiny array of nanoscale copper and carbon spikes mounted on a silicon surface. A nanodroplet of nitrogen sits on the tip of each point. When exposed to carbon dioxide and a small electrical charge, this catalyst sets off an complex chain reaction that essentially reverses the combustion process and converts the gas into liquid ethanol. What's more, because the catalyst is so small, there is virtually no side reactions so the ethanol is quite pure. I mean, you wouldn't want to make a martini with it but it can go straight into a generator and work. Plus, the entire reaction works at room temperature. 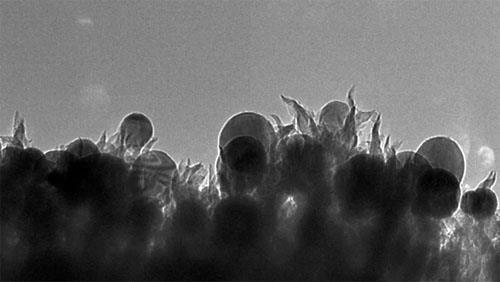 close up of the carbon nanospikes

Were this technology ramped up for commercial or municipal use, it could provide a viable alternative for utility-scale batteries, like the one's Tesla sells. That is, in times of excess energy production from renewable resources, rather than store that electricity in a giant battery, we could instead convert it to ethanol and use that to power generators when renewable sources aren't producing. Plus it would be carbon neutral since the carbon dioxide generated from burning the ethanol would be reclaimed by the catalytic process. There's no word, however, on when this accidental invention will make it out of the lab.