Modi, Putin set to sign energy deals ahead of BRICS 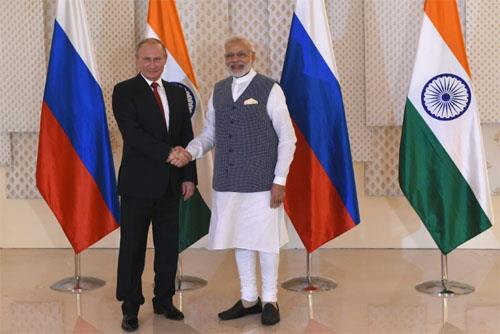 Putin was greeted with a military band and traditional dancers after arriving in the Indian tourism state of Goa for talks with Modi ahead of a BRICS summit.

Other heads of the BRICS club of leading emerging nations -- Brazil, China and South Africa -- were also gathering for this weekend's summit that is expected to focus on trade and counter-terrorism.
Putin is seeking to seal deals with India in an attempt to help revive Russia's recession-hit economy, following sliding oil prices and Western sanctions over the Ukraine crisis.

Among the agreements expected are Moscow's delivery of its most advanced anti-aircraft defence system to India, a deal that has been in the pipeline for several years.
India, the world's top defence importer, is undergoing a $100-billion upgrade of its Soviet-era military, as it looks to protect its borders from arch-rival Pakistan and an increasingly assertive China.

But India has increasingly turned to the United States, rather than Russia for its hardware in recent years, as Modi cultivates closer ties with the Washington.
Nevertheless, India's ambassador to Russia, Pankaj Saran, hailed the "special and privileged" partnership between the two nations. 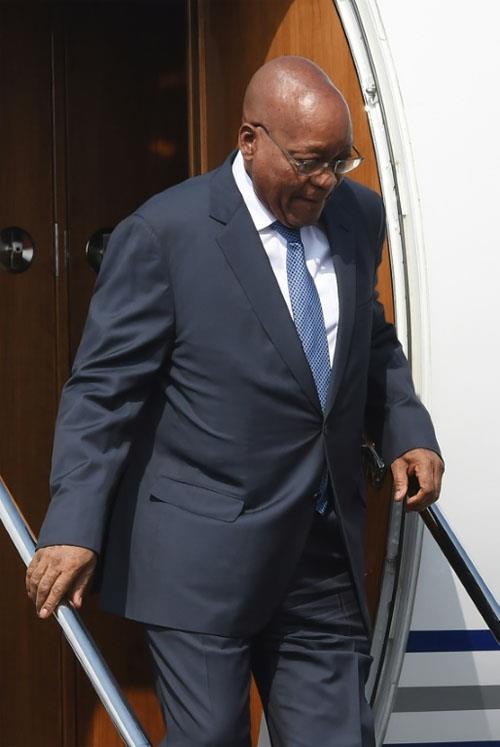 South African President Jacob Zuma arrives at the airport in Goa on October 15, 2016 ahead of the BRICS summit

It is very deep and very intense and it is poised to grow even further," Saran told reporters before the talks got underway.

The leaders are also focusing on energy deals to meet India's growing thirst for fuel and electricity for its fast-growing economy.

The leaders are also expected to sign a framework agreement to supply two more reactors to a nuclear plant in Kudankulam in southern India.

Saran said they would also likely discuss India's tensions with neighbour Pakistan, which spiked after last month's attack on an Indian army base that killed 19 soldiers.

Modi has sought to isolate Pakistan internationally since the attack that India blamed on Pakistan-based militants.

India said it subsequently carried out strikes against militants over the border in Pakistan, prompting a furious response from Islamabad.

But Putin is seen as unlikely to weigh into the dispute between the rivals, as Moscow also eyes closer defence ties with Islamabad. Russia and Pakistan carried out their first joint military exercise last month. 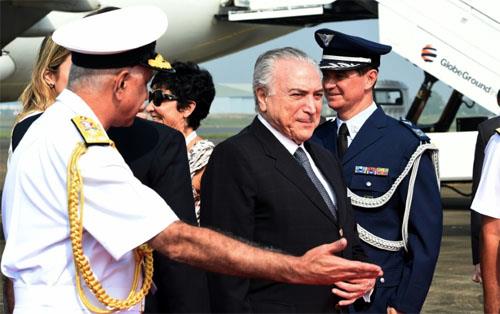 Brazilian President Michel Temer arrives at the airport in Goa on October 15, 2016 ahead of the BRICS summit

In beachside Goa, the two leaders will reach agreement on Moscow's delivery of the S-400 Triumph defence system, Russian news agencies have quoted a Putin aide as saying, without detailing a timeframe.

The S-400 is Russia's most modern air defence system and has been deployed to Syria, where Moscow is conducting a bombing campaign in support of President Bashar al-Assad.

The strong ties between India and Russia date back to the 1950s after the death of Stalin. But trade has slipped from just $10 billion in 2014, which both sides have said is not good enough.

Modi will also hold talks with China's President Xi Jinping late Saturday, in the hope of boosting investment and trade, but with relations frustrated by Beijing's decision so far to block New Delhi's entry to a nuclear trade group, among other issues.

China and India, the world's two most populous nations, are jockeying for regional influence in Asia.

Modi will also host a dinner for the BRICS leaders, ahead of the summmit talks starting on Sunday at a plush beachside resort.

BRICS was formed in 2011 with the aim of using its growing economic and political influence to challenge Western hegemony.