The United Nations Secretary General Ban Ki-moon has just presented his latest report on the “Situation of human rights in the Islamic Republic of Iran” to the UN General Assembly, stressing the abuses carried out by the fundamentalist, theocratic regime.
Ban Ki-moon highlighted his deep concerns about escalating executions, floggings, arbitrary arrests and detentions, unfair trials, denial of access to medical care and torture and ill-treatment. He also expressed concern about continued restrictions of public freedoms and the related persecution of civil society and human rights actors, the persistence of discrimination against women and religious and ethnic minorities and the appalling conditions of Iran’s prisons.
His stark report revealed the barbarous depravity of the regime, with more than 3,000 hangings since the so-called ‘moderate’ President Hassan Rouhani took office three years ago. Recently 25 Sunni Kurds were hanged in a single day. Rouhani justifies such barbarity by saying that the death penalty is God’s judgment on offenders. Nevertheless juveniles and women are regularly hanged, often in public and medieval punishments such as amputations, eye gouging, and lashing are commonplace.
For years the EU and the US have sought to appease the oppressive theocratic regime in Iran and their regional allies, in the flawed belief that acceding to the demands of the mullahs would secure lasting peace. But meanwhile the venomous Iranian spider has taken every opportunity to weave its menacing web across vast tracts of the Middle East, fomenting the spiraling sectarian conflict between Shi’ias and Sunnis, destabilizing the region and threatening world peace. Tehran backs Bashar al-Assad in Syria, the terrorist group Hezbollah in Lebanon, the Houthi rebels in Yemen and the brutal Shi’ia militias in Iraq.
There are now an estimated 70,000 Iranian-led troops engaged in the Syrian conflict, helping to prop-up Bashar al-Assad’s blood-soaked regime. There can be little doubt that the Syrian people would have resolved this conflict themselves years ago, but for the malignant intervention of Iran. The escalation of the vicious struggle in Syria sucked in Russia and laid the foundations for the rise of ISIS (Daesh). The barbaric jihadists used Syria as a springboard to invade Iraq, capturing large swathes of territory for their self-proclaimed ‘caliphate’, including major cities like Tikrit, Fallujah, Ramadi and Mosul. Two years later they have been driven from many of these predominantly Sunni areas by a combined force of Kurdish Peshmerga, regular Iraqi troops and ruthless Shi’ia militias led and funded by Iran. These militias have exacted a terrible price for the liberation of Iraqi territory from Daesh, waging a genocidal campaign against the Sunni population and reducing ancient Iraqi metropolises to smoldering ruins.
The ink had barely dried on the nuclear agreement with Iran on 14th July 2015 before it was being trumpeted as President Obama’s big foreign policy breakthrough, guaranteed to be the highlight of his rather lackluster presidency. Obama’s spin-doctors mounted an impressive and sophisticated campaign to persuade the world that his administration had struck a groundbreaking pact with President Rouhani. In fact the opposite is true. It was a terrible deal, which far from curtailing Iran’s expansionist agenda has significantly strengthened its position in the Middle East. While Iran’s efforts to build a nuclear weapon may have been slowed down, the deal was nevertheless horribly one-sided, lifting sanctions and releasing over $150 billion in frozen assets. This was a windfall for a regime whose biggest export is terror.
While Rouhani smiles for the Western media, waves of mass judicial killings are ruthlessly carried out, designed to create an atmosphere of fear in a population increasingly dismayed at rising food and fuel costs, while their corrupt and fundamentalist rulers pour billions into brutal foreign wars. There have been repeated bread riots and mass demonstrations by schoolteachers and others, which have caused panic amongst the clerical regime, leading to further savage crackdowns. But none of this seems to attract any criticism from the West.
Irrefutable evidence has also recently emerged of the summary execution of more than 30,000 political prisoners by the Iranian regime in the summer of 1988, a crime against humanity that must surely rank as one of the most horrific of the late twentieth century.
The vast majority of the victims were activists of the main opposition People’s Mojahedin of Iran (PMOI or MEK). The mass executions, in jails across Iran, were carried out on the basis of a fatwa by the regime’s then-Supreme Leader, Ayatollah Ruhollah Khomeini. A ‘Death Committee’ of four senior officials approved all the executions. Mostafa Pour-Mohammadi, a member of that ‘Death Committee’, is today President Hassan Rouhani’s Justice Minister. Other members of that committee hold prominent positions in the Iranian regime.
Monstrous acts of butchery like this have become grisly milestones in the history of oppression and tyranny in contemporary Iran. Yet, twenty-eight years on from this barbaric crime, international condemnation has been slow to emerge. Indeed the West seems determined to overlook this perhaps the greatest human rights outrage since the end of World War II, so that it can sign lucrative deals with Tehran. It is a disgrace that there has been no prosecution of the criminals who orchestrated and carried out the gruesome 1988 murders.
It is now crucial for the EU and US to contain this suppressive and terrorist regime. Europe’s policy of active engagement with Iran has only emboldened the mullahs and encouraged them to become even more aggressive, bringing the world closer to yet another catastrophic war. It is shameful that the West continues to act out of fear and cowardice and it is high time they realized that the peace they have bought is only temporary and the price they have paid has been freedom and democracy for the 80 million oppressed and beleaguered people of Iran.
The condemnation of the Iranian regime by Ban Ki-moon should serve as a sharp reminder to the West that appeasing fascism never works. Peace and stability in the Middle East can only ever be secured after the mullahs have been toppled. 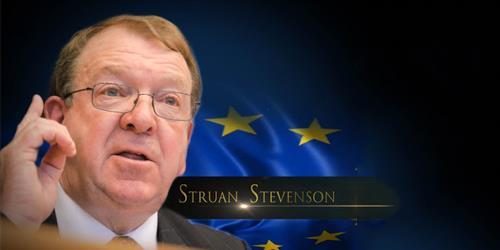