Migrant crisis: 28 dead in day of rescues off Libya

More than 20 migrants are said to have suffocated in the hold of an overloaded boat off the Libyan coast.

BBC, Oct. 5, 2016 - A photographer who was able to board the stricken wooden vessel said more than 1,000 migrants had been crammed aboard.
They were among at least 28 migrants who died in the area on Tuesday, while some 4,655 people were rescued.
The total number rescued over the past two days is more than 10,000, while the death toll is at least 50.
Smugglers have taken advantage of calm weather to push more boats out to sea.
Aris Messinis, a photographer for the French AFP news agency, said many of the dead aboard one particular boat had suffocated.
He said: "It was a wooden vessel and there were about 1,000 people on three levels. I counted 22 bodies and there are still others in the hold."
Mr Messinis's graphic images showed the bodies of dead young men and women, piled on top of one another on the deck of a dinghy and in the cramped hold of a wooden boat.
On Monday, 6,055 migrants were rescued - one of the highest numbers in a single day - and 22 found dead, Italian and Libyan officials said. One Italian ship rescued about 725 migrants from a single rubber boat, the coastguard said - just one of 20 rescue operations that day.
Relatively calm weather is contributing to a surge in the number of people attempting to make the crossing before the cold weather sets in. 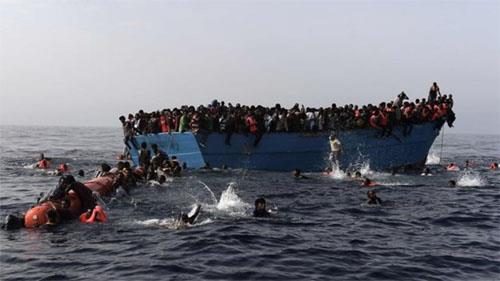 Boats are overloaded by people smugglers, suffocating migrants and causing the vessels to capsize

The surge takes the number of migrants who have arrived in Italy this year to about 142,000 and the death toll to about 3,100, according to the International Organisation for Migration.
The majority come from African countries, including Nigeria, Eritrea, Guinea, Gambia, Sudan, Ivory Coast and Somalia.
European law says migrants must stay in the country where they first enter the EU. With fewer migrants able to travel into Europe via Greece and the Balkan route, and France, Switzerland and Austria effectively closing their borders, Italy is struggling to deal with the growing numbers landing on its shores.
Monday marked three years to the day since 366 migrants died when an overcrowded boat sank off the Italian coast, in a disaster that first drew widespread attention to the plight of those attempting to reach Europe by sea.