Turkey, Reuters-27 September 2016 - Foreign Secretary Boris Johnson says he hopes for a new "jumbo" free trade deal with Turkey after the United Kingdom leaves the European Union.
Speaking during a visit to Ankara, Mr Johnson added that the UK and Turkey had similar positions on Syria.
He called for a "new partnership" between the two countries.
And he told journalists a lewd poem he wrote about Turkey's president had "not come up at all" during first official visit to the country.
Turkey is not a member of the European Union, but has a longstanding ambition to join and its candidacy was a key part of the UK's referendum debate, in which Mr Johnson campaigned for Leave.

Having voted for Brexit, the UK will be able to negotiate its own trade deals with other countries once it leaves the EU.
During a joint press conference with Turkish EU affairs minister Omer Celik, Mr Johnson said: "We are lucky in the United Kingdom to be one of the biggest recipients of Turkish goods. I am certainly the proud possessor of a beautiful, very well-functioning Turkish washing machine, like so many other people in my country." 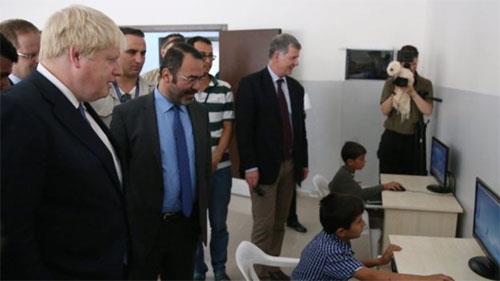 Boris Johnson also visited refugees in a camp in Turkey

At another press conference alongside Turkish Foreign Minister Mevlut Cavusoglu, he said: "What I hope for is a jumbo free trade deal between the United Kingdom and Turkey," adding: "We are leaving the EU, but we are not leaving Europe."
During his visit, the foreign secretary also visited a refugee camp and said the international community must continue to pressure Russia to "stop the carnage" in Syria. 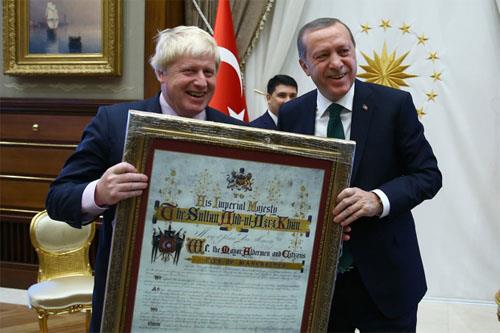 How much does Boris Johnson care about free speech in Turkey?

After the EU referendum, Turkish Prime Minister prime minister Binali Yildirim said Mr Johnson needed to "make it up" with the Turks for comments made during the campaign.
"May God help him and reform him," he told the BBC in July.
The foreign secretary, who has Turkish ancestry, has also faced criticism for penning the winning entry in a Spectator magazine competition for offensive poems about Turkish President Recep Tayyip Erdogan in May.