The air and ground offensive -- the most ambitious launched by Ankara in the Syria conflict -- made rapid progress towards Jarabulus with rebel fighters already proclaiming victory by the late afternoon just 14 hours after it started.
"Jarabulus is completely liberated," Ahmad Othman, a commander of the Sultan Mourad rebel group, told AFP from the scene, while another rebel spokesman said IS fighters had fled towards Al-Bab to the southwest. 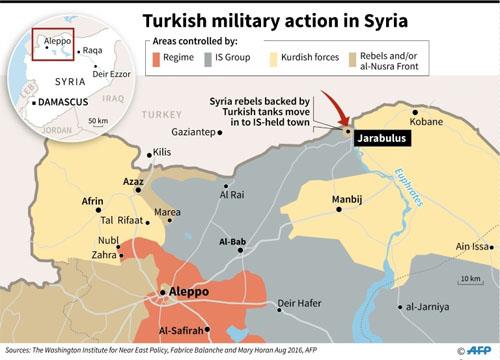 Turkish President Recep Tayyip Erdogan, who hosted US Vice President Joe Biden in Ankara, said Syrian fighters in Jarabulus had "taken it back" from IS.
Turkey's state-run Anadolu news agency reported that just one Syrian rebel fighter killed and 10 wounded. No Turkish forces lost their lives.
Erdogan had earlier emphasized the operation was also targeting Kurdish militia fighters strongly opposed by Ankara -- but backed by the US as a key ally against IS -- who had also been closing in on Jarabulus.
Biden reassured Turkey that Washington had told the Kurdish fighters under no circumstances to cross west of the Euphrates River or face the total loss of American support. 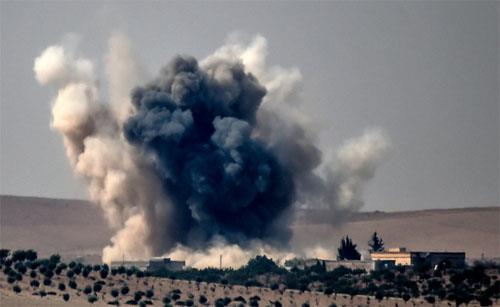 An air strike by a Turkish jet fighter hits the Syrian village of Jarabulus on the Syrian-Turkish border during fighting against the IS group on August 24, 2016

The operation -- named "Euphrates Shield" -- began at around 4:00 am (0100 GMT) with Turkish artillery pounding dozens of IS targets around Jarabulus.
Turkish F-16 fighter jets also hit targets inside Syria.
A dozen Turkish tanks then rolled into Syria along with hundreds of Syrian opposition fighters in pick-ups who then moved south towards Jarabulus.
US A-10s and F-16s warplanes also hit IS targets in Syria in support of the offensive, a US official said.
The speed of the advance was stunning and stood in stark contrast to the long, grinding battles required for Kurdish forces to recapture towns from IS in northern Syria, such as Kobane and Manbij. 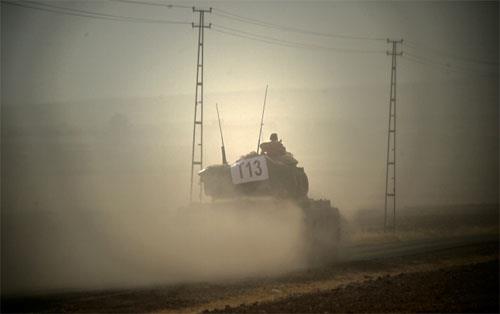 A Turkish army tank drives towards Syria in the Turkish border city of Karkamis on August 24, 2016

Turkey's NTV television said that IS militants had shown little resistance to the advancing forces. The Dogan news agency said 46 jihadists were killed but this was not confirmed by officials.
Syrian fighter reconnaissance teams have begun working in the center of Jarabulus to check for any explosives left behind by the jihadists.
A Turkish official, who declined to be named, said: "Turkey will continue operations until we are convinced that imminent threats against the country's national security have been neutralized."
Turkey wants to show it is serious about taking on IS, which has been blamed for a string of attacks inside the country -- the latest a weekend attack on a Kurdish wedding in Gaziantep that left 54 people dead, many of them children.
Ankara has in the past been accused of turning a blind eye to the rise of IS in Syria and even aiding it logistically, claims the government had always vehemently denied.
Biden on Wednesday said Washington had made clear to pro-Kurdish forces in Syria that they must not cross west of the Euphrates River.
"They cannot, will not and under no circumstances (will) get American support if they do not keep that commitment. Period," he said.
The Turkish air strikes were the first since a November diplomatic crisis with Russia sparked when the Turkish air force downed one of Moscow's warplanes.
The developments have come at a critical juncture for Turkey in Syria's five-and-a-half-year war, with signs growing it is on the verge of a landmark policy shift.
Ankara has always called for the removal of President Bashar al-Assad, putting Turkey at odds with his main supporters Iran and Russia.