In Iran, massive internet restrictions for citizens contrast with free use of social media by government officials

The Media Express, Aug. 17, 2016 – Iranian regime President Hassan Rouhani has criticized the filtering and prohibition of “cyberspace, the digital world, and social networking” in a recent speech, as well as deriding the confiscation of satellite dishes to prevent the dissemination of information.
But ironically, all of the above have taken place during Rouhani’s tenure, which has seen an increased clampdown on internet use by Iranian citizens.
In a recent annual report on press freedom, the Freedom House group said that press freedom in countries which are ruled by repressive leaders has reached its lowest level of the past decade. The report names Iran as one of the 10 countries with the least press liberties. 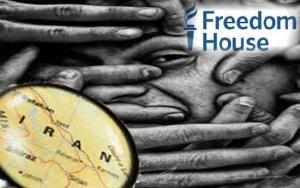 Iran’s regime leaders have limited free use of social media and the internet while themselves being active Twitter and Facebook users, both personally and for public communiqués. While many sites are not blocked outright, Facebook, Twitter, and YouTube have been heavily filtered by the state since the 2009 election of Rouhani.
At the same time as Rouhani’s speech deriding the limitation of cyberspace freedoms was occurring, the Iranian regime was issuing orders for the banning and removal of an audio tape released last week which revealed details about the 1988 prison massacres that took the lives of as many as 30,000 political prisoners.
The tape, which reveals the extent of the Iranian regime’s involvement and complicity with the events, has brought belated attention to their actions during the crackdown on members and supporters of the People’s Mojahiden of Iran (PMOI), the main political resistance group in Iran and primary target of the purge.
Social media has become a target for government censorship in the Middle East and North Africa in particular since the Arab Spring revolutions began in 2011, many of which were driven by social media communications.