DHAKA, Bangladesh, New York Times- AUG 4, 2016 — When the Bangladeshi police freed hostages after a harrowing July 1 terrorist attack on a Dhaka bakery that left 22 people dead, two men remained mysteriously unaccounted for.
Their families and other hostages said that the two — Tahmid Khan, a 22-year-old student at the University of Toronto, and Hasnat Karim, a 47-year-old Briton working in Bangladesh — had been hostages during the attack and had been taken into custody after the siege ended. They asked the authorities to reveal their whereabouts, but were kept in the dark.
On Thursday, Shahidur Rahman, deputy inspector general of the Dhaka police, confirmed that both of the men were in custody and had been arrested the previous night under a law that allows such action without a warrant. The police previously said that the two men were suspected of involvement in the attack.
Mr. Khan had been visiting Dhaka on a summer vacation when the attack on the Holey Artisan Bakery took place, and Mr. Karim had come to Bangladesh several years ago and was working for a family-owned civil engineering company. Mr. Khan was beaten and both men were taken into police custody after the 11-hour siege, other hostages said. 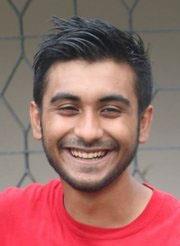 Tahmid Khan, in a photograph provided by his family.

More than a week after the attack, their families said they had no knowledge of the men’s whereabouts since the police stormed the cafe, killing five people identified as attackers.
Mr. Khan and his friends at the bakery were spared by the militants because they were Bangladeshi Muslims, said two people who were held hostage with him, who spoke anonymously for fear of upsetting the police.
They said that Mr. Khan and Mr. Karim had been placed at a table of eight patrons, including Mr. Karim’s two children, all of whom survived the attack. They were instructed to keep their heads down on the table for much of the night.
But several times during the siege, the attackers ordered Mr. Khan and Mr. Karim to perform specific tasks for them, including carrying weapons, the two hostages said.
Mr. Khan’s family and friends have said that his detention is a case of mistaken identity and that they are concerned about his health, which includes epilepsy triggered by stress.
.
Although the Dhaka police said on July 10 that they no longer had Mr. Khan or Mr. Karim in custody, their families said they believed that the men were being held by a government agency. Mr. Karim’s wife and two children, who were also held hostage, were released from custody on July 3.
On Thursday, it was not clear what had happened to the men between the end of the hostage crisis and their arrest on Wednesday night. Rodney Dixon, a London-based lawyer working with the Karim family, said that the family had not had access to Mr. Karim since the attack, and “therefore he must have been in detention” in the intervening time.
Mr. Karim’s wife did manage to see him for a few minutes on July 13 at the detective headquarters in Dhaka, but has not seen him since, Mr. Dixon said.
The treatment of the two men by the Bangladeshi authorities has raised concern from human rights experts, who have expressed fear that pressure to solve the case could lead to torture in the interest of extracting confessions.
On July 12, Amnesty International called on the government to clarify Mr. Karim’s whereabouts. The group said Mr. Karim had a heart ailment and highlighted conflicting statements from the authorities about whether he was in police custody.