U.S. intelligence agencies recently identified nine training camps inside Iran where jihadists from Afghanistan are being schooled for fighting in Syria, according to U.S. defense officials.
The camps are part of a large-scale paramilitary training program run by Iran’s Islamic Revolutionary Guards Corps (IRGC), Islamic shock troops, to battle Syrian rebels opposing the regime of Bashar al Assad that Tehran is backing.
The camps were identified in satellite photographs located in areas of northeastern Iran close to the Iraqi border, said officials familiar with intelligence reports of the training.
Iran is predominantly Shiite Islam and the Afghan fighters are mostly Shiite refugees who settled in Iran over the past several years.
A State Department official said he was aware of the reports. “If true, it would be a cruel exploitation of a group of vulnerable people already living in a precarious situation as refugees,” the official said. “And it would be another unfortunate reminder of the depths to which Iran is willing to go to continue to prop up the Assad regime.”
Few details were available on the Afghan fighters’ training that is said to include practice in the use of weapons and explosives, and basic military training techniques. 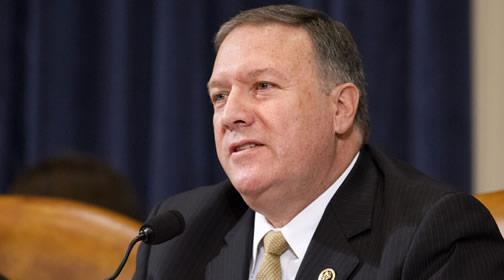 Rep. Mike Pompeo, (R.-Kan.), a member of the House Permanent Select Committee on Intelligence, said Iran has been expanding military operations using cash obtained under the Obama administration’s nuclear deal.
“After the Joint Comprehensive Plan of Action, a wave of cash flooded into the Islamic Republic of Iran, allowing the regime to dramatically increase its military budget,” Pompeo said.
“As a result, Iran’s malign influence in the region is growing quickly,” he added. “The IRGC is increasingly the most powerful force in many Middle Eastern capitals, including Damascus.”
Pompeo said the Iranian people “would be better served if their leaders spent funds on domestic improvement, instead of supporting international terrorist groups.”
Security affairs analysts said the camps are part of an Iranian program to promote its brand of Islamic jihad, or holy war, toward creation of an Iran-dominated Islamic region or caliphate.
Sebastian Gorka, Horner professor of military theory at Marine Corps University, said “The murder and mayhem is not simply about Sunni jihadis like al Qaeda or the Islamic State,”
“It is also about the competing Shia vision of their own expanding caliphate which has succeeded and is now gaining ground in Syria”he added.
If reports of the training camps for Afghans in Iran are confirmed, “then the mullahs have upped their game,” Gorka said.
“It is no longer about deploying Quds Force operators or IRGC units into the battlespace, but also sponsoring proxies and now actually training deniable force-multipliers such as these Afghan jihadis,” he said.
“The war for theocratic hegemony in the Middle East is escalating and America is conspicuously absent.”
Bill Roggio, editor of the online Long War Journal, said Iran has a history of providing direct support to both the Taliban and al Qaeda. “In this case, Iran is training Shia Afghans to fight in Syria and Iraq,” he said, noting that his journal has documented the deaths of some of the fighters. 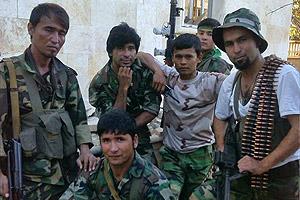 Tehran is leveraging Shiites throughout the Middle East and South Asia to wage proxy wars in Iraq and Syria. “In the process it is indoctrinating the vanguard of Iranian power in these countries,” Roggio said. “The repercussions of Iran’s expansion of influence via the militias will be felt for generations.”
Michael Rubin, a former Pentagon official now with the American Enterprise Institute, said Iran’s Qods Force last year posted an online notice of the death of a Hazara commander, as Afghan Shiites are called.
The use of Afghans is a troubling development because Iran is home to around 1 million Afghan refugees.
“Should they become indoctrinated and fodder for Qods Force recruitment, this would expand Iran’s ability to fight by proxy not only in battlegrounds like Syria, but also in Afghanistan itself,” he said.
Iran is using non-Iranian Shiites because they view the Syrian conflict as a religious, sectarian war that is not just about Syria but defeating Sunni Muslims.
“Second, Iran has been taking far greater casualties than it expected and so it is supplementing its fight with Shiite recruits from outside Iran,” Rubin said. “From the Iranian point of view, why not fight in Syria to the last Afghan or Iraqi?” 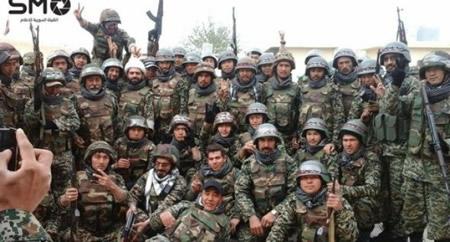 Earlier this month, the Iranian exile group National Council of Resistance of Iran posted online a video clip used by Iran to recruit Afghans to fight in Syria. It includes images of Afghans who have died in Syria.
People’s Mojahedin Organization of Iran, known as MEK, estimates Tehran has dispatched more than 70,000 fighters, including both Iranians and foreign fighters, to the conflict.
They include between 15,000 and 20,000 fighters of a group called the Fatemiyoun, an Afghan militia set up by IRGC Quds Force.
The plight of the estimated 1.5 million Afghan refugees in Iran is said to include lack of personal or legal identity and poverty.
The MEK stated that Qods Force training for the Afghans includes two to four weeks of basic military training. Upon completion of the training, the Afghans are paid the equivalent of $500 and sent to Syria in groups of 200 fighters.
Transport aircraft send the Afghans to Damascus and missions typically last for 60 days. All commanders and trainers are IRGC members.
The group Human Rights Watch reported in January that Iran is sending thousands of Afghans to Syria.