42 dead in Istanbul airport carnage blamed on IS

AFP, June 30, 2016 - Turkey pointed the finger of blame at Islamic State jihadists after suicide bombers armed with automatic rifles attacked Istanbul's main international airport, killing 41 people, including foreigners.
Witnesses described scenes of terror and panic on Tuesday evening as the attackers began shooting indiscriminately and then blew themselves up at the entrance to Ataturk airport, one of Europe's busiest hubs.
The assault, which comes at the start of Turkey's crucial tourist season, was the latest in a wave of attacks in Istanbul and the capital Ankara blamed either on Islamic State (IS) jihadists or Kurdish rebels.
Interior Minister Efkan Ala said there was an ongoing "serious and comprehensive investigation" into who was behind the attack, using another name for IS as he told reporters: "First signs point to Daesh but it's not certain yet." 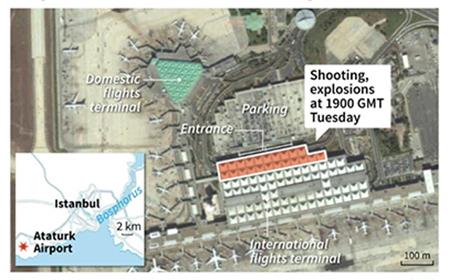 CIA director John Brennan also said the attack bore the "hallmark" of the jihadist group.
Istanbul's governor said 42 people were killed, including 13 foreigners, and 239 wounded.
One of the dead, who included Saudis, a Chinese national, and a Ukrainian, was a Tunisian identified as Fathi Bayoudh, a doctor who had reportedly been in Turkey for several weeks in an attempt to repatriate his son.
The carnage sparked global condemnation, with US President Barack Obama speaking by phone with his counterpart Recep Tayyip Erdogan to express his condolences.
Erdogan declared Wednesday a national day of mourning after urging an international "joint fight" against terror.
Security camera footage widely circulated on social media appeared to capture two of the blasts. In one clip a huge ball of flame erupts at an entrance to the terminal building, scattering terrified passengers. 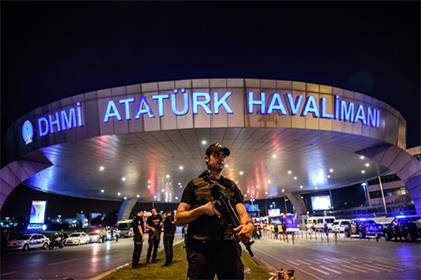 Another video shows a black-clad attacker running inside the building before collapsing to the ground -- apparently felled by a police bullet -- and blowing himself up.
The attack came just as Turkey, which had found itself increasingly friendless on the international stage, begins rebuilding relations with Israel and Russia.
It also follows coordinated IS suicide bombings at Brussels airport and a city metro station in March that left 32 people dead.
Obama appeared to back the theory that IS carried out the Istanbul attack, telling reporters in Canada: "It's an indication of how little these vicious organisations have to offer beyond killing innocents."

Women sobbed outside a local morgue, while families were desperately waiting for news of loved ones outside several Istanbul hospitals. 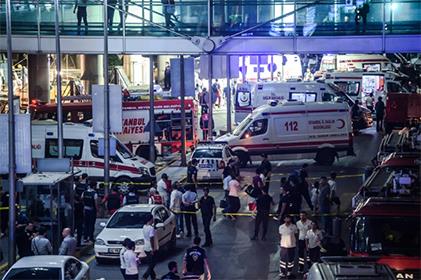 "Let me see him, I beg you," a woman screamed outside one hospital. "No one's told me what's happened to my child. I raised him. They're not telling me anything."
Diplomats in Tunis said Fathi Bayoudh, a Tunisian killed in the attack, had travelled to Turkey to secure the release of his son who was detained for joining IS, the country's private Mosaique FM radio reported.
The airport itself was back up and running by early Wednesday, with workers clearing up the shattered glass and nervous passengers filing in as flights resumed.
"I felt very anxious coming to the airport," Irish tourist Steven Parkinson told AFP.
"You hope obviously that something like that, it won't happen two days in a row again, that there is a lot of security -- but obviously it affects you." 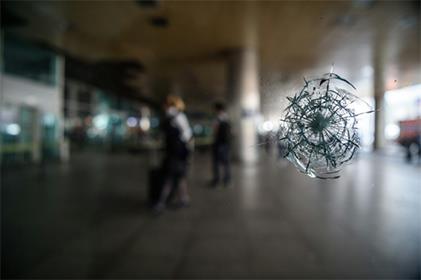 Prime Minister Binali Yildirim told a press conference in Ankara late Wednesday that Turkey would "increase the presence of specially-trained staff" at the nation's airports.
South African university administrator Judy Favish said she had hidden under a counter as the attackers opened fire.
She and other travellers were ushered to the basement before emerging about two hours later.
"We walked through the airport and saw debris and blood. It was just chaos," she told South African TV network eNCA.

Tourism, a key source of income in Turkey, has been badly hit by a spate of deadly recent bombings. 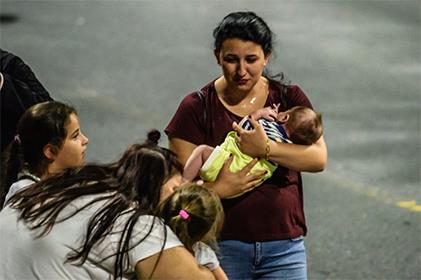 People embrace as they leave Istanbul's Ataturk airport on June 28, 2016

The government will be hoping to recoup some of the losses after Russia on Wednesday lifted punishing sanctions imposed over a diplomatic spat, including a ban on package holidays.
But Ege Seckin, an analyst at IHS Country risk, said the attack was "most likely conducted by the Islamic State to undermine the Turkish economy by attacking the airport ahead of the summer months, when tourism peaks".
The country has been hit by at least five attacks blamed on IS jihadists, including a blast in Ankara in October that left over 100 dead, the worst in the country's modern history.
In January, a bombing in the heart of Istanbul's tourist district, also blamed on IS, killed a dozen German visitors.
Two months later, three Israelis and an Iranian were killed in another attack attributed to the jihadists on the city's main Istiklal shopping street.