AFP, June 26, 2016 - European lawmakers urged Britain Sunday to begin EU exit proceedings at a summit this week, as Germany suggested the country should be given time to "reconsider" the impact of its vote.
Amid confusion and dissent over the timetable for any "Brexit", Martin Schulz told German newspaper Bild am Sonntag that a period of limbo would "lead to even more insecurity and thus endanger jobs".
"Hesitating simply to accommodate the party tactics of the British Conservatives hurts everyone," Schulz, a German Social Democrat, said.
"That is why we expect the British government to now deliver. The summit on Tuesday is the right time." 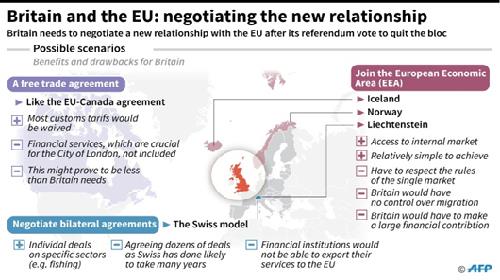 Britain and the EU: negotiating the new relationship

However, German Chancellor Angela Merkel's chief of staff insisted there was no rush to show Britain the door.
"The political leadership in London should have the chance to reconsider once again the consequences of a withdrawal," Peter Altmaier told the RND media group.
He later clarified in a statement to AFP that he was "explicitly" not suggesting a do-over of the fateful referendum.
He noted that once Britain left the union, it would be a "serious turning point with many consequences". 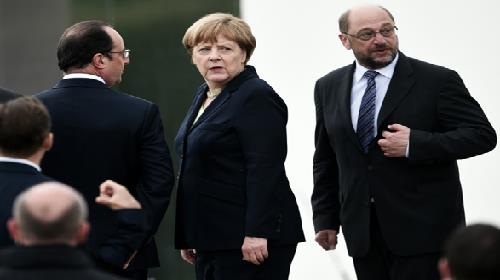 German Chancellor Angela Merkel hosts the leaders of France, Italy and the EU in Berlin on Monday to discuss the Brexit crisis

Altmaier had earlier told German public radio that he had "no indication" that British Prime Minister David Cameron would start the Brexit process Tuesday.
"I tend to think that the application will be filed in the coming weeks or months, possibly only by a new government," he said.
After the new administration has been formed, it will "then sort itself out and, as the case may be, present its application. We should all wait calmly for that".

Yet the German government itself appeared divided on the approach to negotiations, with Economy Minister Sigmar Gabriel taking a hard line and ruling out any new EU offer to keep Britain in the fold.
"You can't be a little bit pregnant. Or have half a membership," he told business daily Handelsblatt, blasting Cameron for a "giant and historic mistake" in calling the referendum.
Echoing Schulz, the four biggest groups in the European Parliament have drawn up a draft resolution calling for Cameron to set the Brexit ball rolling on Tuesday, Germany's Frankfurter Allgemeine Sonntagszeitung reported. 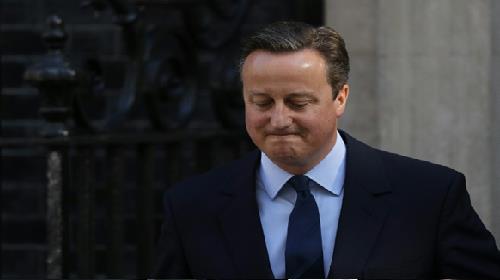 This was crucial, the groups wrote, "to avoid damaging uncertainty for all and to preserve the integrity of the union".
They added that "no new relationship of whatever kind between the United Kingdom and the EU can be agreed before (Britain's) exit accord has been completed".
Cameron said Friday in the wake of the shock referendum outcome that he would resign his office by October and leave the Brexit negotiations to his successor.
To begin the withdrawal process, Britain must invoke Article 50 of the EU's Lisbon treaty, which sets the clock ticking on two years of negotiations.
Foreign ministers from the EU's six founding states meeting in Berlin on Saturday urged Britain to begin the exit process "as soon as possible".
However Merkel, who looked likely to take the lead in future talks, was more cautious, saying it was up to Britain to decide when to begin withdrawal proceedings, although they should not "drag on forever".
"There is no reason to be nasty in the negotiations. We have to follow the rules of the game," she said.