Iran No. 1 sponsor of terrorism the biggest beneficiary of Nisman death

Argentine prosecutor Alberto Nisman died of a single bullet to the head in January 2015, a day before he was scheduled to testify to Argentina’s Congress about an alleged government cover-up of the 1994 Iranian terrorist bombing of a Buenos Aires Jewish community center. There is still no official court ruling on whether he was murdered, but a new investigative report—to be published Tuesday—goes a long way in proving motive.
Joseph Humire, the executive director of the Washington, D.C., based Center for a Secure Free Society, uses thousands of documents and legal wiretaps released to the public to show how the prosecutor’s death eliminated a key stumbling block for Iran and “paved the way for [it] to move into a new phase of its information and intelligence operations in Latin America.” If the theocracy, which is the No. 1 state-sponsor of terrorism in the world, did not murder Nisman, it was the biggest beneficiary of his death.
Nisman was the special prosecutor investigating the terrorist attack on the Jewish community center—known by its Spanish initials as the AMIA. In 2006 he indicted eight former Iranian officials (including former President Ali Rafsanjani) and one Lebanese national. The following year, at Nisman’s behest, Interpol issued “red notices” for the arrest of six of the accused. But Iran took no action.
Using legal wiretaps, Nisman later built a case that President Cristina Kirchner’s government had a covert agreement with Iran to wipe Tehran’s fingerprints off the AMIA attack in exchange for Iranian oil and reopening Iran’s market to Argentine grain and beef.
Nisman had filed a criminal complaint against members of the Kirchner government the week before he died. Killing him did nothing to stop the public from learning of the contents of his report. Yet his death did put the brakes on his plan to bring the Iranian crime into the international arena. It had the potential to undermine the key foreign-policy objectives of Tehran.
Iran’s asymmetric warfare against the West demands commercial engagement because it allows Tehran to deploy political operatives specializing in propaganda, intelligence and terrorism and to finance their activities under the guise of business activity.
In December 2014, Iran’s priority was to end U.N. sanctions in order to facilitate this capability. This meant securing legitimacy via successful negotiations with the five permanent members of the U.N. Security Council plus Germany. Nisman was about to get in the way.
In a safe-deposit box in Buenos Aires some months after Nisman’s death, investigators discovered a document signed by him and dated December 2014. It is an appeal to Argentine authorities to formally request that the U.N. invoke its charter and intervene in the AMIA case. 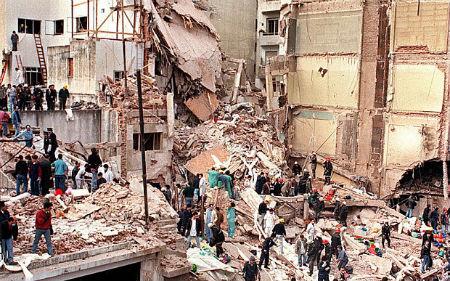 Nisman had produced more than “1,500 pages of open source reporting on Iran and Hezbollah” activities in Latin America.

“Iran’s refusal to extradite its accused, according to Nisman, placed it in noncompliance with its international obligations to support a legal case of international terrorism with another U.N. member,” Mr. Humire writes. Moreover, “Nisman cited Sudan and Libya as precedent for U.N. intervention when state sponsorship of terrorism obstructs justice on an international terrorism case.”
By 2015 the nuclear talks were entering a crucial stage. Whether President Obama would have reconsidered the U.S.’s legitimization of Iran, already under way, is far from certain. The U.S. president doesn’t like to let facts get in the way of his legacy agenda.
But if Nisman had a hearing at the U.N., his extensive investigation could not have been ignored. According to Mr. Humire, the prosecutor had produced more than “1,500 pages of open source reporting on Iran and Hezbollah” and another 1,500 pages of classified material that is still not public on the AMIA attack. At a minimum it would have challenged Iran’s denials that it supports terrorism.
Mr. Humire argues that the classified material, which is in a 2003 Argentine report, should be declassified so Argentines have the “knowledge necessary to grasp the seriousness and longevity of Iran’s influence in their country.” The rest of the hemisphere also deserves to know about Iran’s designs. As Mr. Humire says: “At a time when U.S. influence has diminished in the region, Latin America is arguably Iran’s top foreign policy priority outside of the Middle East.”
Authoritarian Venezuela, Bolivia and Nicaragua have welcomed the presence and influence of Iran. But others are being surreptitiously invaded, beginning with embassies, cultural centers and mosques. Peru’s southern rural communities are typical targets for launching networks. Front companies in the beef and oil industries in Brazil and Uruguay are used to provide cover for Iranian operatives. As for Chile, Mr. Humire’s report shows how Iran has infiltrated universities.
It’s not hard to see how the end of sanctions on Iran—triggering the liberation of $150 billion in assets and the reopening of international economic channels—will increase Iran’s penetration of the Western Hemisphere.