Kuwait City (AFP) May 10, 2016 - Yemen's government and Iran-backed rebels agreed Tuesday to free half of the prisoners and detainees held by both sides, in the first breakthrough in peace talks that began last month.
Officials from the two delegations told AFP that a working group formed by the UN special envoy Ismail Ould Cheikh Ahmed, had reached an agreement to release the prisoners and detainees within 20 days.
The government's official news agency Saba also confirmed the deal, citing the official delegation.
The UN envoy said the two sides were expected to finalize the agreement on Wednesday.
"They agreed in principle to explore a proposal to release 50 percent of all detainees held by each side ahead of the holy (Muslim fasting) month of Ramadan and eventually release all detainees," said Ould Cheikh Ahmed.
"They agreed to continue discussions in the next session scheduled for May 11," he said in a statement.
The issue was discussed as part of confidence-building measures.
A source close to the Huthi rebel delegation also said an agreement had been reached, describing it as "an exchange of prisoners".
The two sides would meet again on Wednesday to finalize the mechanism on how and when the exchange will take place, Matari said. 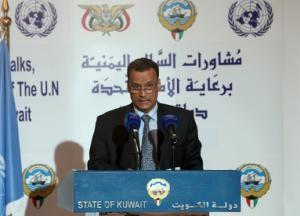 Matari estimated that their number is in the "thousands", but the rebel source said there may be only hundreds of prisoners involved.
Following a two-day interruption, the two delegations resumed face-to-face talks on Monday after mediation efforts and an appeal by the UN envoy.
Two other working groups, spanning military, security and political issues, also discussed on Tuesday more complicated issues.
Those issues include implementing a UN Security Council resolution which orders the Huthis to pull out of territory they occupied in a 2014 offensive and surrender heavy arms they captured.