Reuters, 7 May 2016 - Russia’s defense ministry said a “regime of calm” truce in the northern Syrian city of Aleppo and parts of Latakia province had been extended “for 72 hours beginning at 1 a.m. on Saturday” (1700 ET on Friday), Syrian state news agency SANA reported.
A fragile local truce had been in place for Aleppo city since early on Wednesday. In northern Latakia province, it first took effect on April 29, after a wider truce deal in western Syria brokered by Washington and Moscow broke down. 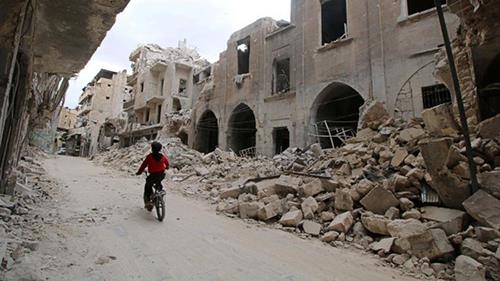 A boy rides a bicycle near damaged buildings in the rebel held area of Old Aleppo, Syria May 5, 2016