Lesbos, Greek- Queen Rania of Jordan continued her quest to raise awareness about the plight of Syrian refugees today as she visited the Greek Island of Lesbos.
She called for "legal" paths into Europe for refugees.
"It’s absolutely crucial for us to look for legal alternatives and more safe and effective pathways to Europe and areas of safety," she said on the Greek island of Lesbos, the focal point of Europe’s greatest migration challenge since World War II.
The 45-year-old Jordanian queen spent time with female refugees before making a heartfelt speech about the current migrant crisis.
Queen Rania was on the island at the beginning of Holy Week at the invitation of the International Rescue Committee (IRC). 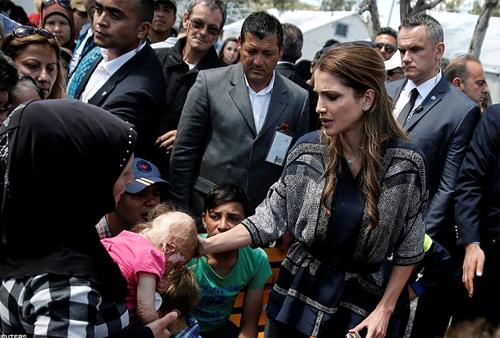 Queen Rania of Jordan touches the head of a baby from Afghanistan, who has severe burns, during her visit to Greece today.

Syrian refugees constitute ten percent of the population in Jordan, which counts a refugee camp as its fourth largest ’city’.
In comparison, wealthy Western countries have pledged fewer than 130,000 resettlement spots, and only around 67,100 people - a mere 1.39 percent of the refugees - have made it to their final destinations since 2013, British charity Oxfam said last month.
And last month’s closure of borders along the Balkan migrant route has also sparked fears that more asylum-seekers will attempt the dangerous Mediterranean crossing to Italy.
Around 53,000 people, many fleeing the war in Syria, are now stranded in Greece, including some 46,000 who arrived before the deal took effect.
’This is an exceptional crisis and requires an exceptional response,’ Queen Rania said, adding: ’Greece...can’t be the last stop for these refugees.’
She also called for more international support to humanitarian agencies such as the International Rescue Committee and the UN refugee agency UNHCR, who have been instrumental in providing refugees and migrants in Greek camps with food, water and shelter.
’Just being here today made me realise how over-stretched and under-resourced they are,’ she said.
Rania al-Yassin is a Kuwaiti-born Palestinian who holds a degree in business administration from the American University in Cairo.
She is a well-known advocate of causes such as education, health and women’s rights.