Geneva: 26 years on since the assassination of Dr. Kazem Rajavi

April 24 is the 26th anniversary of the assassination of Professor Kazem Rajavi by a terrorist hit squad of the Iranian regime. He was a well-known defender of human rights in Iran and elder brother of Mr. Massoud Rajavi the Iranian Resistance leader.
At the age of 56, Prof. Kazem Rajavi held six doctorate degrees in the fields of law, political science, and sociology from the universities of Paris and Geneva. 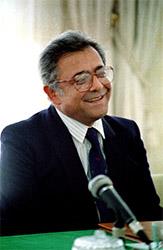 In 1971 he established the Swiss Society for Defense of Iranian Political Prisoners with the help of a resident of Geneva by the name of Christian Grobet who later became head of government advisors during the years 1986 to 1993. Kazem’s younger brother Massoud Rajavi had been condemned to death on political charges by the Shah. Kazem succeeded in commuting the sentence to life in prison.
He was Iran’s first Ambassador to the United Nations headquarters in Geneva following the 1979 revolution. Shortly after his appointment, he resigned his post in protest to the "repressive policies and terrorist activities of the ruling clerics in Iran." He then intensified his campaign against mass executions, arbitrary arrests, and torture carried out by Iran’s theocratic leadership.
He became the representative of the main opposition coalition National Council of Resistance of Iran (NCRI) in Switzerland and at the UN in Geneva. In Geneva he was also a university professor.
His resolve in the struggle against the new regime that systematically trampled upon human rights led to the appointment of a UN Special Rapporteur for Iran and the first resolution on Iran at the UN Commission on Human Rights in Geneva.
Dr. Rajavi had been threatened with his life. In the hall of the UN Headquarters, a diplomat-terrorist of the regime once shouted at him: “We will kill you!”
In 1986, then-Supreme Leader of the mullahs’ regime Ruhollah Khomeini issued a fatwa for Dr. Rajavi to be killed.
On 24 April 1990, he was gunned down in broad daylight by several agents of the Iranian regime’s notorious Ministry of Intelligence and Security (MOIS) as he was driving to his home in Coppet, a village near Geneva.
Dr. Rajavi’s assassination required enormous resources, extensive planning, and coordination among several of the regime’s organizations. After extensive investigations, Roland Chatelain, the Swiss magistrate in charge of the case, and Swiss judicial and police officials confirmed the role of Iran’s government under Ali Akbar Hashemi Rafsanjani and the participation of thirteen official agents of the Iranian regime who had used "service passports" to enter Switzerland for their plot.
Swiss magistrates later issued an international arrest warrant for a former Iranian intelligence minister, Ali Fallahian. Fallahian and 13 Iranian diplomat-terrorists are wanted on charges of murdering Dr. Rajavi.