A top European Union official pressured the U.S. Thursday to accept more Syrian refugees fleeing the civil war, saying that asylum seekers should not be likened to Muslim extremists.
Stavros Lambrinidis, the agency’s special representative for human rights, said that taking more migrants would help ease the pressure on Europe, which is struggling to bring in the massive amount of refugees that are waiting at the borders of several European countries.
"To the extent that we can all understand this global issue and share the responsibility, this will clearly alleviate the pressure on Europe right now and Greece in particular," Lambrinidis said at the Center for Strategic and International Studies.
"To our knowledge, there is absolutely no evidence in the case of the US, that giving asylum to people is opening the door to terrorists."
The White House announced last year that the number invited to move to the U.S. as refugees will be increased to 85,000 in 2016, including 10,000 Syrians. The U.S. accepts 70,000 refugees annually from around the world.
Lambrinidis called the anti-refugee rhetoric in the U.S. and Europe is alarming and undermines the West’s international obligations. 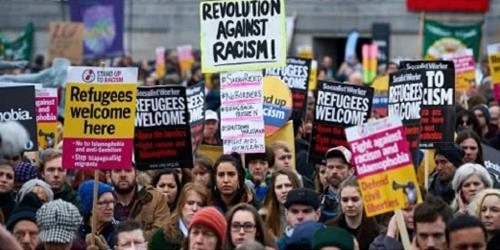 Europe has seen a rise of far-right parties fueled by the refugee crisis and terrorist attacks in European capitals.
"The easy rhetoric, the populist rhetoric that we have in Europe or that you have here, that asylum means opening the door to terrorism is something that we have to nip in the bud in my view," Lambrinidis said. "It’s extremely dangerous and it also endangers our obligation ... under international law."