By US Sen. James Lankford

As we confront threats of terrorism all over the word, national security and Middle East stability are more important than ever for Americans. In addition to border security, strong defense and capable intelligence services, any homeland security strategy must address nuclear threats and accountability measures for Iran and its nuclear program.
Many of my colleagues in the Senate and I were exceedingly skeptical last July when the Obama administration signed the Joint Comprehensive Plan of Action, more commonly known as the Iran Nuclear Deal. The deal’s proponents argued that it would curb Iran’s bad behavior and prevent, or at least postpone, Iran from obtaining a nuclear weapon.
Quite optimistically, they argued that bringing Iran back into the international fold would set the country on a path away from supporting terrorism, toward a cooling of tensions with Israel, and away from further development of conventional weapons, such as ballistic missiles.
In reality, much of the deal’s language is ambiguous and open to misinterpretation, and the administration’s commitment to the so-called "snap-back" sanctions remain in serious question. 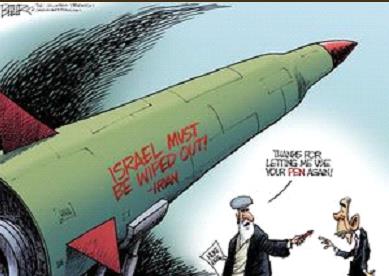 I repeatedly spoke out against the deal last summer, and I voted against it when it was presented to the Senate last September in the form of a resolution of disapproval. Unfortunately, that vote failed to meet the needed 60-vote threshold by two votes.
Looking back at the events of the past seven months, our skepticism clearly was justified. Iran remains the world’s largest state sponsor of terrorism. In March, Iran conducted multiple test flights of ballistic missiles. Several of them were capable of reaching Israel and were emblazoned with a slogan in Hebrew: “Israel must be wiped off the Earth,” according to an Iranian-government controlled news outlet. On Tuesday, Russia announced it would ship S-300 air-defense missile systems to Iran — an advanced capability that will provide extensive protection for nuclear and military facilities.
In February, I questioned Director of National Intelligence James Clapper  during an Intelligence Committee hearing. I asked the Clapper about Iran’s behavior since the signing of the nuclear deal. He confirmed that Iran was still the world’s largest state-sponsor of terrorism and that it continues to behave provocatively. I asked him if he had seen any change in Iran’s testing of ballistic missiles, and the director’s answer was a firm “no.” In fact, he confirmed that there had been about 140 missiles launched by Iran in violation of U.N. agreements, half of which were launched during the Obama administration’s negotiations with Iran.
My concern is not just Iran in possession of a nuclear bomb; the leadership of Iran continues to threaten the stability of its neighbors, such as Saudi Arabia, Yemen, Bahrain, and Lebanon. Meanwhile, it is propping up the deplorable regime of Bashar al-Asad in Syria. If Tehran builds nuclear weapons, their reign of terror would only increase. A nuclear-armed Iran is an unacceptable scenario.
Renewed focus and leadership on this issue is vital. On Wednesday, I continued to fight the Obama administration’s appeasement strategy with Iran by introducing a Senate resolution to hold Iran accountable and ensure President Obama follows through on his commitment to reimpose sanctions if Iran violates the nuclear deal. This resolution is an important step to clarify our expectations and set in stone the Senate’s view of U.S. actions if specific terms of the deal are breached.
My resolution says that, if Iran violates the nuclear deal, the United States must immediately reapply our nuclear-related sanctions, push for the U.N. Security Council to reinstate Iran sanctions resolutions, work with our European partners to limit their financial ties to Iran, and seek a U.N. Security Council resolution that limits exports of defensive weapons to Iran. Additionally, my resolution makes clear the Senate’s expectation that Iran make public its uranium enrichment plans, research and development plans, and procurement requests.
It is imperative that we show fortitude in efforts to curb Iran’s irresponsible behavior, even if those in the administration would prefer to declare victory and pivot to other issues. If Iran violates the nuclear agreement, our response should be swift and severe. Until Iran proves it can act like a peaceful nation, we must remain vigilant and steadfast against its global terror agenda.
James Lankford, a Repubican, is the junior U.S. senator from Oklahoma.