How does Iran feel about Russia departing Syria?

The very important development seen recently in the Middle East with Russia announcing a major change of plans in departing Syria has spread shockwaves across the globe. Iran has felt the most trimmers and will be facing difficulties coping with the difficult road ahead as more isolation is brewing in the not so distant future. 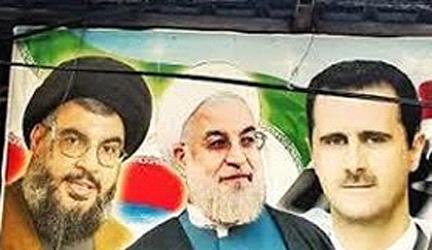 newsvine.com, 19 March 2016 - The sudden reports of Moscow pulling its troops out of Syria, announced by Russian President Vladimir Putin, immediately gained worldwide attention, with analysts sprinting to define the reasons and consequences of such a major development. Despite the fact that Iran attempted to lay low and remain silent to allow the tide to pass, or have Foreign Minister Mohammad Javad Zarif actually claim to welcome the turn of events, the fact that the ruling elite in Iran have been caught off guard and are truly alarmed is not something that can be swept under the rug or simply denied.
A Strategically Important Development
The fact of the matter is this decision is very important and very serious, with strategic consequences and impacts in the regional and international balance of power. Russia announcing intentions to maintain presence in two bases in Syria fails to downgrade the importance of the Kremlin deciding to pull its weight out of the war in Syria. It appears such a move is more aimed at decreasing the blow of such a decision for Russia itself, and to allow Putin to save an image. Interesting is how very quickly after Putin issued his orders the first squadron of Russian warplanes departed Syria and landed on permanent bases back home. Alongside further shocking reports of the Lebanese Hezbollah deciding to pull hundreds of fighters out of Syria, Tehran is left trying to weigh the recent major setbacks.
Iranian state TV described the Russian decision as unexpected. However, this was not something unexpected for those following the developments in Syria, and it should not have been unexpected for Iran either. Media outlets associated to various factions inside Iran have been reporting of signs of Russia’s disloyalty for some time now. Tabnak website, associated to former Revolutionary Guards chief Mohsen Rezaie, posted a very in-depth analysis regarding Russia dragging its feet on delivering the S300 surface-to-air missile system. “The Russians are seeking their own interests and have no commitment to Hezbollah,” the article reads in a reference to the force on the ground in Syria. One can easily come to this conclusion that this analysis has named Hezbollah, while truly alluding to Iran itself.
Why Did Russia Pull Out of Syria?
A senior Russian official attempted to legitimize this recent move by saying Moscow never had plans to remain in Syria forever. Of course, all international analysts understood that Russia had entered the Syria equation seeking certain political and economic concessions, and would leave immediately once this objective was reached. But why now?
Firstly, one must cite the heroic perseverance seen in the Syrian people and freedom fighters who stood their ground, fought for the country and unfortunately, were forced to pay a heavy price. However, they proved once again there is no force or army more powerful than a nation determined to realize its God-given right to liberty.
Although Putin claimed to have reached all of their desired objectives in Syria, there are numerous signs showing the exact opposite. Putin has come to realize the Assad regime is clinging on to its last days, and remaining in Syria would come at a heavy cost for Moscow. This became significantly more important as Saudi Arabia frankly informed Russia of its intentions to arm Syrian rebels with advanced anti-air weaponry, significantly altering the balance of power against Moscow.
United Nations Special Envoy to Syria Staffan de Mistura had also warned Russia if the current Geneva peace talks fail, “Plan B” will go into effect, placing Russia against the international community and all Arab states. Various analysts also cited the plunge in oil prices as an effective element in Putin’s decision, especially the Russian campaign in Syria was costing Kremlin $3 million a day.
The Road Ahead
Whatever the reason behind Russia’s withdrawal of Syria, it has left Iran terrified. This is not a complex issue. Russia pulling out of Syria will leave Iran alone against all the powerful elements that forced Russia out of this scenario. And it is quite obvious that Tehran lacks the capacity and forces needed to cope and overcome this reality.
As a result, Iran is left facing a difficult fork in the road in Syria. Following Russia’s lead of evacuating Syria will result in the fall of Iran’s most important barricade and strategic depth in the region. Remaining in Syria at all cost will backfire at Tehran with enormous consequences.