As international efforts to end the violence in Syria continue, Canadian doctors are reaching out to Syrian patients through the internet.
As physician shortage in Syria makes medical treatment difficult, Canadians stepping in.
It’s a process called telemedicine. Through a satellite video connection, doctors in Canada can consult on cases with Syrian doctors and even sit in on surgical procedures in an intensive care unit.
Nahla Zitoni is originally from Syria and still has family in Aleppo. She helps facilitate the project and establish the connections between doctors in Syria and in Canada.
"There is a very severe lack of physicians [in Syria]," Nahla Zitoni told CBC News. "It’s very important. We have a shortage of physicians and all medical staff over there. Some of them left, some were killed, others arrested … it’s very important to help"
Though the telemedicine project began about three years ago, its importance is growing as the violence in Syria continues, she said.
Earlier this month, Syrian civilians were killed in what Doctors Without Borders calls "deliberate attacks" against at least five hospitals and two schools in northern Syria.
Zitoni said doctors in those hospitals had been practicing telemedicine with their Canadian counterparts. Several of those doctors died in the airstrikes, she said.
Doctors in Canadian cities, including Windsor, Ont., Toronto, Edmonton and Calgary, are volunteering their time to meet with Syrian doctors and patients through video.
A common practice is for radiologists to use the video link to look at X-rays and consult with Syrian doctors on how best to treat the patient. 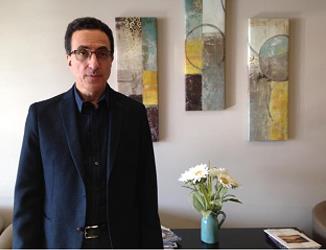 Dr. Ahmad Chaker, who is also originally from Syria but based in Windsor, Ont., is participating in the telemedicine program. Calls usually come in every few weeks, but he’s heard they’ve increased after the recent airstrikes.
He’s consulted on cases involving head injuries, comas and other trauma-related illnesses.
"My role is to advise them what to do on a primary level and to direct them to medical centres in Turkey and Europe," Chaker said. "We have some cases that have to go to Germany for medical treatment."
Chaker’s telemedicine contribution is in addition to humanitarian visits he’s made in the past to treat patients near the Syrian-Turkish border.
"More calls come when there is major injuries, when people are in comas, when there are major physical injuries to the back or the limbs," he said.
Though seeing a patient through the internet isn’t ideal, Chaker said it’s a surprisingly efficient process.
"It is difficult, but with the images today, it’s helped a lot," Chaker said. "They send it to us, we try to communicate with specialists here in Canada and we try and get the opinion and go back to them."
Both Chaker and Zitoni say security is the biggest issue for both doctors practicing in Syria — and for patients looking for help. Through telemedicine, there may be a way to get people the help they need.
"It’s very hard, even to go and get someone who is injured or sick to the hospital, it’s very dangerous to go to some areas," Zitoni said. "There are not enough facilities in the area. It’s very hard to give enough, but they do their best and that’s all they can do."