A number of brave Iranian women whose youth sons and daughters were slain during the 2009 nationwide uprising against the mullahs’ regime have publicly criticized Ayatollah Khomeini the founder of the Islamic Republic for establishing a dictatorial regime which murders Iranian youth by the day.
The mothers spoke out at a gathering in Tehran’s Shahriar District last Friday to mark the sixth anniversary of the death of Mostafa Karim-Beigi who was killed by the Iranian regime in the course of the 2009 anti-regime uprisings. Many relatives of martyred opponents of the regime and political prisoners took part in the ceremony.
Ms. Shahin Mahin-Far, whose son Amir Arshad Tajmir was killed in the course of the 2009 uprising, said her heart had been ripped apart by her son’s death. The regime’s henchmen riding a police vehicle ran over his body three times.
Ms. Fatemeh Golgari, whose son, labor activist Afshin Osanloo, died in mysterious circumstances in prison in Iran on June 20, 2013, said at the gathering: "Now should have been a time for joy among our youths, but instead it’s their time to be buried."
"I’ve got something in my heart which I need to say. Let my dear ones and let even the regime hear this. The day when the Imam [Khomeini] came and sat in a cemetery and said ’they’ve turned this place into a cemetery but I’ll turn it into a garden full of flowers,’ we didn’t understand what he meant by a garden full of flowers. Now we know, he meant that they will kill our youngsters and bury them, and each time we’ll have to go there to law flowers on their graves," Ms. Golgari said.
"I long for the day of freedom, when Iran will be free and blossoming and we can all be friends and good brothers and sisters," she added.
Other speakers also condemned the mullahs’ regime in their speeches at the ceremony held at the grave of Mostafa Karim-Beigi. His mother Ms. Shahnaz Akmali Karim-Beigi recited a poem in his memory, saying that he had given his life for the freedom of Iranian people.
Part of her poem said:
“Know this my bullet-ridden flower,
That your mother has managed to endure in your memory.
We will never go away; Mostafa’s spirit is with us,
And freedom is a pure word in all this world.”
Among the participants were Ms. Gohar Eshqi, mother of murdered dissident blogger Sattar Beheshti; Ms. Sholeh Pakravan, whose daughter Reyhaneh Jabbari was executed last year for killing an intelligence agent of the Iranian regime in self-defense; and relatives of members of the People’s Mojahedin Organization of Iran (PMOI or MEK) who were executed in Iran in the 1980s.
The suppressive security forces tried in vain to force a quick end to the ceremony, but participants bravely resisted their pressures.
Mostafa Karim-Beigi was 27 years old when he was shot and killed on December 27, 2009 in Neauphle-le-Château Street in Tehran by agents of the mullahs’ regime.
Thinking Mostafa had been arrested, his family spent more than two weeks searching for his whereabouts until they discovered his corpse at a morgue in Iran’s notorious Kahrizak Prison. 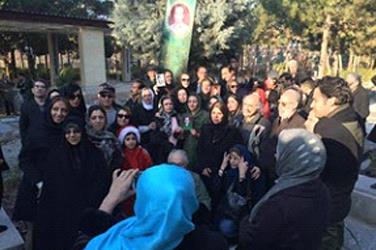 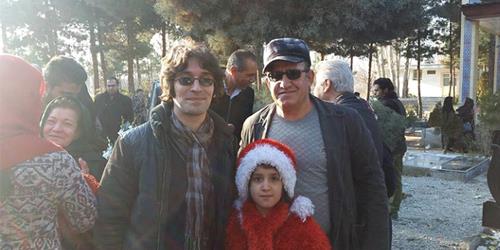 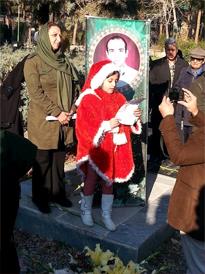