With the Russian bombing campaign now in its fourth week, Moscow and Washington announced they had agreed measures to ensure air safety over Syria, where a US-led coalition is also carrying out strikes, AFP reported.
The exodus was focused south of second city Aleppo, one of five areas where loyalist forces have launched offensives since Russia began its air war on September 30.
"Around 35,000 people are reported to have been displaced from... the southwestern outskirts of Aleppo city, following government offensives," said Vanessa Huguenin, spokeswoman for the UN Office for the Coordination of Humanitarian Affairs.
She said many "urgently need food and basic household and shelter items" as the weather gets colder.
Syria’s war has killed more than 250,000 people and forced millions from their homes since March 2011, recently sparking a mass migration of refugees that has raised tensions in Europe.
To reduce the risk of a confrontation between Russian warplanes and others from a US-led coalition bombing Syria, Moscow and Washington announced an understanding on safety measures.
"There’s a series of protocols in place that effectively are intended to avoid any sort of risk of a mid-air incident between our air crews and Russian air crews," Pentagon press secretary Peter Cook said.
In Moscow, a deputy defence minister, Anatoly Antonov, said "the memorandum contains a number of rules and restrictions aimed at preventing incidents".

Russia has carried out more than 500 air raids in support of President Bashar al-Assad. 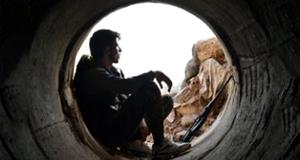 A rebel fighter rests during clashes with pro-government forces

The strikes are reported to have so far killed 370 people, including more than 120 civilians, the Britain-based Syrian Observatory for Human Rights said.
Among them were 45 rebels and civilians killed on Monday in Russian strikes in the north of government stronghold Latakia province, it said.
Dozens were also wounded Monday, in some of the deadliest raids yet, and the commander of a moderate rebel brigade was among the dead, the Observatory said. 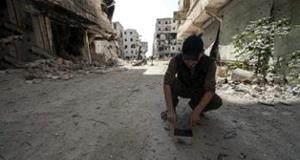 Rebels and their backers accuse Moscow of seeking to prop up Assad, a longtime ally, and accuse Russia of striking moderate and Islamist opposition forces rather than just jihadists.
The Observatory said Russian strikes had targeted Aleppo, Damascus, Homs and Idlib provinces.
As many as 100,000 people were fleeing the army’s ground assaults in Aleppo, Hama and Latakia provinces, it said. 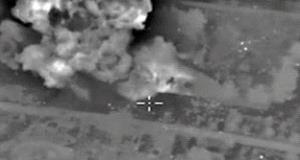 Syrian activist Maamun al-Khatieb said thousands had fled fierce Russian bombardment and "the fear that Iranian militias would storm their villages".
Iran, a key Assad ally, has reportedly sent hundreds of troops to fight alongside his forces.
Aleppo, once Syria’s commercial hub, has been a key focus of the fighting. Since 2012, the city has been divided between government forces and rebels.
On Friday, government forces began a new offensive south of the city, attacking areas near the strategic highway to Damascus.
The Observatory said regime forces had seized five villages in the area since the offensive began.

- ’Whatever they could carry’ -

The Aleppo-Damascus highway via Hama and Homs provinces appears to be the main target of several of the recent offensives.
In Hama, much of the fighting has centred on an area close to the road, and in Homs, the government has been fighting to take villages along the highway just north of the provincial capital.
In Homs, thousands of people have fled from a string of villages since the army offensive there began Thursday, said Hassaan Abu Nuh, an activist in the town of Talbisseh.
"They’ve spread throughout the outskirts of Homs... those who left took whatever they could carry," he told AFP.
Meanwhile on Tuesday, Canada’s new prime minister-elect Justin Trudeau said Canadian fighter jets would withdraw from fighting the Islamic State group in Iraq and Syria.
During his campaign, Trudeau pledged to bring home the jets and end Canada’s combat mission, but gave no timeline for the withdrawal. Seventy Canadian Special Forces troops will remain in northern Iraq to train Kurds.