• All forms of engagement with Iranian regime must be made contingent upon termination of the death penalty. As long as the wave of executions continues in Iran, shaking hands with the mullahs is not justified in any way.
• Supporting Assad and his continued rule help ISIS survive; eviction of the Iranian regime is the only way to overcome ISIS. 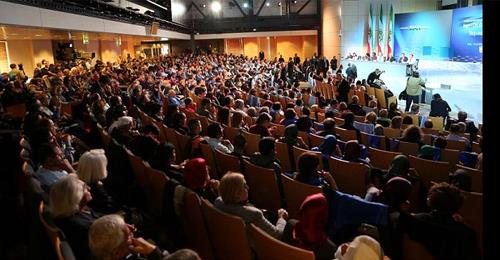 In an international conference in Paris on the occasion of October 10th, the World Day Against the Death Penalty, the Iranian Resistance's President-elect Maryam Rajavi declared: Our plan is an Iran without the death penalty and obliterating the mullahs' religious decrees.

She emphasized: Torture and executions must be stopped; this is the demand of all of Iran's people. To the governments of the West we say: Set aside your silence and inaction over the executions and atrocities of the mullahs’ religious fascism and instead, respect the Iranian people’s resistance for freedom. If Western governments had stood up to the abuse of human rights in Iran, the mullahs could never expand their barbarity to Syria and Iraq. 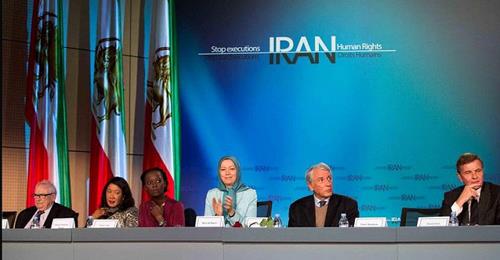 Mrs. Rajavi warned: Any form of relations and engagement with the Iranian regime must be made contingent upon termination of executions in Iran. As long as this sinister trend is in progress, it is not justifiable to shake hands with leaders of a regime that has carried out 120,000 political executions.

Emphasizing that the whole world must stand up to the ruthless massacre of the people of Syria, Mrs. Rajavi reiterated: Some people misleadingly argue that the fall of the Syrian regime will open the gates of Damascus on ISIS, yet this is an argument manufactured by Iran’s ruling mullahs in a bid to save their puppet regime. On the contrary, it is supporting Assad and his continued rule that help ISIS continue to survive and expand. By the same logic, the only way to overcome the ISIS is to evict the Iranian regime from Syria and Iraq and topple Assad. 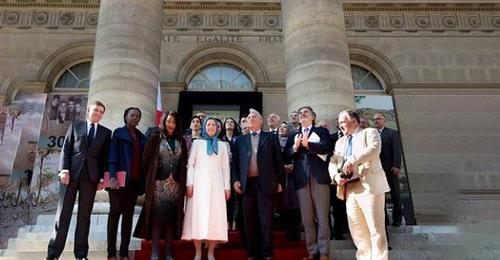 The conference sponsored by the Committee Defending Human Rights in Iran, was entitled, "Iran, Human Rights, Stop Executions". A number of European and international personalities, elected representatives of the people of France, as well as human rights and women's rights advocates attended the meeting. From France, Gilbert Mitterrand, former member of the French National Assembly and President of France Libertés (Danielle Mitterrand) Foundation; prominent jurists and lawyers including Henry Leclerc, François Colcombet and Patrick Baudouin; Rama Yade, former Minister of Human Rights; and a number of elected representatives of the people of France including Jean-François Legaret, mayor of 1st district of Paris; Jean-Pierre Béquet, former mayor of Auvers-sur-Oise; and Jean-Pierre Brard, former member of the National Assembly; Pierre Bercis, former president of the New Human Rights Organization; and Bishop Jacques Gaillot; Phumla Makaziwe  Mandela, women’s rights advocate and daughter of Nelson Mandela, the late leader of South Africa; from Albania, Ermonela Felaj, government’s liaison minister with the parliament; Edmond Spaho, Vice President of the Parliament; and a number of parliamentary deputies including Mmes. Evis Kushi and Blerina Gjylameti and Messrs. Tahir Muhedini, Arben Cuko, Musa Ulqini and Bedri Hoxha who addressed the conference on behalf of a large political delegation. Also Zhani Viktor Ciko, leader of Albania’s Symphonic Orchestra, along with a delegation of musicians from that country had a beautiful performance. From Britain, David Jones and Mark Williams, members of the British House of Commons; and Hanan Al-Balkhi, representative of the Syrian Coalition in Oslso; and Taher Boumedra, former human rights director of the United Nations Assistance Mission in Iraq - UNAMI;  were among the speakers at the Paris meeting. 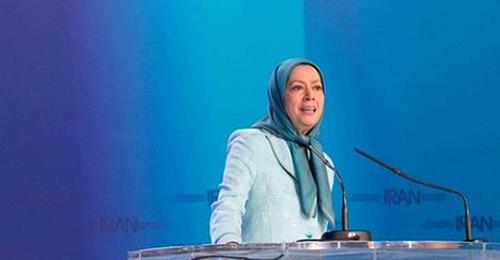 In another part of her speech, Mrs. Rajavi underlined that the dimensions of human rights abuse in Iran has jumped in every respect, targeting all the people of Iran: from human rights defenders to women, youths and teachers, and from Christians, Bahaii’s and the Sunnis to Arab, Baluchi and Kurdish compatriots.

Criticizing continued appeasement of the Iranian regime, Mrs. Rajavi added, “Indeed, why does the world remain silent when Iranian political prisoners are tormented to death or hanged? Why is the world silent when juveniles are executed in Iran? Today, a large number of our defenseless countrymen are secretly executed in prisons across the country. Several thousands more are on the death row. We think of their parents, and of their wives and children who spend all nights and days under stress. We think of the women who sell their kidneys to pay for their husbands’ blood money and save them from being executed. Shame on those who turn a blind eye to so much abuse of human rights in Iran!” 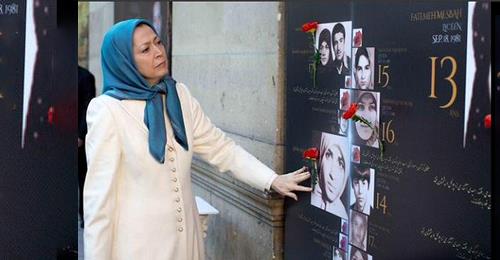 She reiterated, “Those who seek to wash the stain of these crimes off the hands of the regime’s president must know that this policy will open the way for more atrocities and genocide in the region and the world. Rouhani has explicitly pronounced that these executions ‘are either based on Divine Law or on some legislation adopted by the parliament… and we only carry them out.’ Despite their differences, the ruling mullahs have a common viewpoint on executions and repression. They benefit from executions to preserve their regime. However, the criminals should know that the blood they spill every day from the body of the Iranian nation will turn into a flood that will ultimately put an end to the mullahs’ regime.”

Elaborating on the Iranian Resistance's plan for tomorrow's free Iran, Mrs. Rajavi declared: Our plan for future is an Iran without the death penalty, obliterating the mullahs' religious decrees and establishing an independent judiciary, defending democratic values, freedom, equality and sanctity of every citizen’s private life; no one will be arrested arbitrarily and torture is banned.

Mr. Farzad Madadzadeh, a political prisoner who has been recently released after five years of imprisonment in the clerical regime's torture chambers, and Pariya Kohandel, whose father is a political prisoner in the Gohardasht Prison of Karaj, both supporters of the PMOI in Iran who have recently left the country, spoke on the abysmal state of the Iranian people’s lives and the horrible prison conditions. Their speeches were among the most interesting segments of the "Iran, Human Rights, Stop Executions" conference.  They urged international organizations to go beyond words in condemning the regime's abuses and put on trial in international courts the Iranian regime leaders for their crimes, especially the 1988 massacre of 30,000 prisoners and the unrelenting, daily executions in Iran. 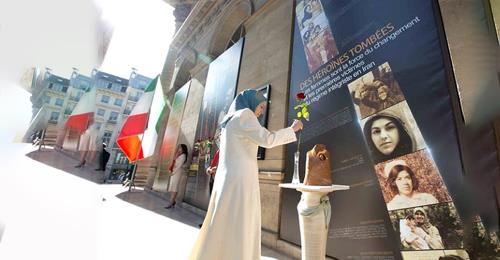 Secretariat of the National Council of Resistance of Iran
October 10, 2015