Question: Are Russia’s airstrikes the 1st consequence of the Iran nuclear deal?

Just 2½ months after the P5+1 signed a controversial nuclear deal with Iran, we see Russia – an ally of Syria along with Iran – launching horrific airstrikes on moderate Syrian opposition fighters and civilians, leaving dozens dead and injured to this day. The following article in The Hill sheds light on this matter:
Time will look longingly back to the last of the blood moons — the spectacular supermoon painted in the deepest cadmium orange on Sept. 28 — for signs of Armageddon, economic collapse and hellfire rising from earth and sky. There will be some disappointment. Once again, nothing happened.
But a closer look will find a sea change did occur thereabouts, and one which could drag us into and through the century rising; one which may even determine America’s fate beyond the century. For within the celestial framework said to mark the age in transition, the “historic deal which will prevent Iran from acquiring a nuclear weapon” — the White House’s polemic for the arrangement known universally in the vernacular as the “Iran deal” — was finally signed into being on July 14, 2015.
Time will recall this and then it will next recall this: In late September, less than three months after the signing, Russia — partner, with China, to the Iran deal — sent warplanes to advanced combat into Syria. 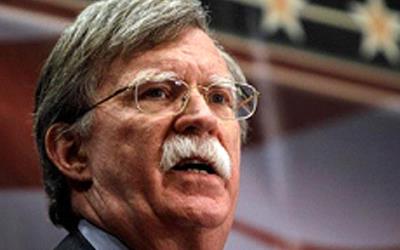 “Putin is pursuing a very broad strategy I think, bidding for dominance in the Middle East over the U.S.,” former Ambassador to the United Nations John Bolton told Fox News. “There is a lot at stake here that goes beyond the exact target of these strikes.”
This is bad news for Secretary of State John Kerry. He knew the Russian fighters were coming, but, no worries, for it was the judgement of “our military and most experts” — the same folk who brought forth the Iran deal — that they would be used only for “force protection.”
“Inane,” said Bolton. “The complete blindness of the administration was reflected in the confusion over these past two days when the airstrikes began.”
Our friends, said Bolton, see power passing from our hands to Russia’s.
Is this militaristic action of Russia into Syria a first consequence of the Iran deal? Does it mark a conspicuous deception on behalf of our Russian partner?
How could it possibly be otherwise?
Would Russia have lulled us into acquiescence in the Iran deal? Or had we willingly lulled ourselves?
This cannot be good for Kerry. Just days before the Russian incursion, he was a slam-dunk to win the Nobel Peace Prize. The Nobel committee would love to get on board with the Europeans, the Russians, China, Iran and almost everybody (except Israel), but nobody likes to be tricked; tricked again, like Lucy pulling the football out from under Charlie Brown.
And had Kerry won the Nobel Prize, he would suddenly rise to view in the contentious squabbling of Democrats as the brave new hope for the presidency in 2016. Now the prize is more likely to go to Pope Francis, which might give the archetypal Irish-Catholic working-class-hero Vice President Biden a boost. Better it go to someone like Brandon Stanton of Humans of New York, who is miles closer to the human condition than the antiquated and anachronistic Nobel Committee, which can see nothing now but with politicized Western eyes.
And 2016 will begin a turning; a new outlook, a new cultural framework, a new kind of presidency and the beginnings of a new (post-millennial) American generation.