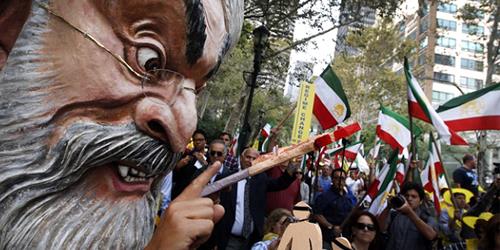 A protester wearing a large mask resembling Rouhani attends an anti-Rouhani rally outside UN headquarters ahead of the leader’s address to the 70th session of the UNGA, Sept. 28, 2015, in New York.

NEW YORK – Washington Post - Iranian-American protesters said Monday that the country’s current regime has executed about 2,000 dissidents in less than two years, making human rights a key issue in U.S.-Iran relations.
Thousands gathered in Dag Hammerskjold Plaza outside the United Nations just as Iranian President Hassan Rouhani was to speak to the world body’s General Assembly.
The protesters want him removed.
“We want to show that not only is the Iranian regime a threat to the international community, but also a threat to the people within Iran,” said Ben Borhani, a student at Irvine Valley College in southern California.
He noted that executions often follow arrests on “arbitrary drug trafficking charges. ... A majority of the time, these people are political prisoners.”
The Iranian diaspora is examining the Iran deal just approved by Congress that would lift economic sanctions in return for restrictions on Iran’s nuclear program.
Bill Richardson, a former U.S. ambassador to the U.N. who spoke at the rally, said he supports the nuclear part of the deal but is very concerned about a possible arms escalation. Richardson said that with sanctions removed, Iran would have more money to buy weapons that could be used in Syria and Yemen, as well as for Hamas and Hezbollah, two groups that seek Israel’s destruction.
Monday’s rally was led by the Organization of Iranian-American Communities and the National Council of Resistance of Iran.
Borhani said he would like to see “a true democracy” in which Iranians could express themselves freely.
The president-elect of Iran’s Paris-based parliament in exile, Maryam Rajavi, issued a statement urging that the “illegitimate” representatives of Rouhani’s regime be expelled from international institutions.
“Rouhani is part of a regime whose survival is ensured only through daily executions, torture of prisoners, suppression of women and plundering of social wealth, as well as terrorism and destruction in the region,” she said.