The Washington Free Beacon has learned and published that Iran is permitted to test-fire ballistic missiles under the parameters of the recently inked nuclear accord, according to private disclosures made by Secretary of State John Kerry to a leading U.S. senator.
Nothing in the nuclear deal prevents Iran from testing a “conventional ballistic missile,” which could be used to carry a nuclear weapon, according to series of written answers provided by Kerry to Sen. Marco Rubio (R., Fla.).
The Obama administration’s failure to rein in Iran’s ballistic missile program has emerged as a key criticism among critics of the deal. They argue that during the 15-year duration of the agreement, Iran will be given the opportunity to perfect its ballistic missile program, which could put it much closer to an operable nuclear weapon.
“It would not be a violation of the JCPOA [Joint Comprehensive Plan of Action] if Iran tested a conventional ballistic missile,” Kerry informed Rubio, according to a copy of the 86-page document obtained by the Free Beacon.
“The issue of ballistic missiles is addressed by the provisions of the new United Nations Security Council Resolution (UNSCR), which do not constitute provisions of the Joint Comprehensive Plan of Action (JCPOA),” Kerry writes, explaining that the nuclear accord does not cover such matters.
“Since the Security Council has called upon Iran not to undertake any activity related to ballistic missiles designed to be capable of delivering nuclear weapons, including launches using such ballistic missile technology, any such activity would be inconsistent with the UNSCR and a serious matter for the Security Council to review,” Kerry adds.
However, Rubio and others are concerned the U.N. resolutions are not actually mandatory, meaning that Iran can decide on its own whether it wants to uphold the resolutions.
“According to the new U.N. Security Council Resolution, the prohibition on Iran carrying out ballistic missile work is not mandatory, but rather the text simply ‘calls’ on Iran not to conduct such activity for eight years,” Rubio informs Kerry. “Is that the case? What are the penalties if Iran ignores this international ‘call’?”
Kerry appears to admit this is the case but claims the U.N. resolutions will “not let Iran’s ballistic missile program off the hook.”
Kerry does not elaborate on what penalties, if any, would be issued on Iran should it move forward with a ballistic missile test, saying only that “if Iran were to undertake them it would be inconsistent with the UNSCR and a serious matter for the Security Council to review.” 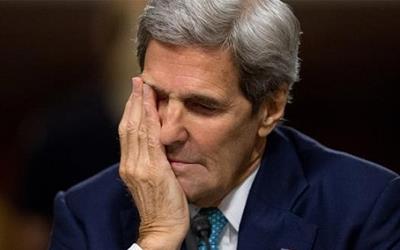 One senior foreign policy adviser involved in the fight over the nuclear deal called Kerry’s response “terrifying.”
“The administration is admitting that it changed the old binding language against ballistic missile development to a weak non-binding ‘call’ on Iran,” said the source, who was not authorized to speak on record. “So now the Iranians are going to be working on ballistic missiles that can hit the United States, and they won’t suffer any automatic penalties.”
“Instead, the administration says our response will be to have U.N. countries like Russia and China ‘review’ Iran’s work, which is insane—those are the countries that will be selling Iran the technology in the first place,” the source said.
Kerry’s acknowledgment that Iran is spared from restrictions on testing ballistic missiles appears consistent with rhetoric from senior Iranian leaders.
Iranian President Hassan Rouhani said in recent weeks that the Islamic Republic will not abide by any restrictions imposed by the international community.
Iran is “not committed to the restrictions on its missile program,” Rouhani said, adding that a violation of international restrictions would not impact the nuclear accord.
“We have formally announced that we are not committed to these provisions [related to missiles] mentioned in [the] U.N. resolution,” Rouhani was quoted as saying in an Aug. 29 Persian-language speech broadcast on Iran’s state-controlled television networks.
The nuclear deal states that a violation of U.N. bans on Iran’s missile program would not constitute a violation of the JCPOA.
Within the deal, “we have explained that a violation of the U.N. resolution does not mean violation of the JCPOA,” according to Rouhani, who also said Iran’s missile stockpiles have grown under his tenure as president.