Iran: Suppression of women and gender apartheid intensified under pretext of “mal-veiling”

The Iranian regime parliament is deliberating on a scheme dubbed “protecting hijab and chastity” in order to ramp up the atmosphere of terror in the society and to intensify suppression of women in particular. Most of the articles of this 13-article legislation that was in general ratified by regime’s parliament last October aims at limiting women’s employment and imposing still further pressure and suppression of women on the mullahs-fabricated pretext of “mal-veiling”. 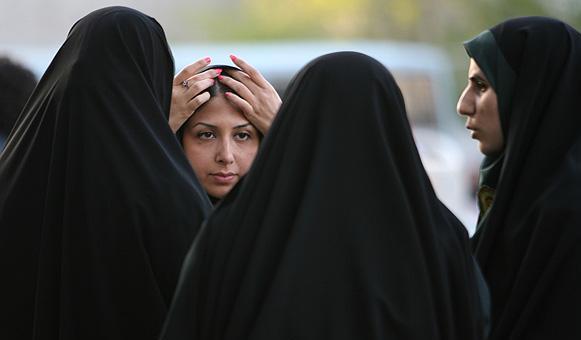 According to one of the ratified articles of this legislation, if the driver or passenger of a vehicle takes off her veil… she will be fined one million rials and the driving license of the driver will get 10 negative points.
Mohammadali Asfanani, speaker of regime’s parliamentary committee on Judiciary and Legal Affairs, emphasized that the “officials of the security forces may revoke driver’s driving license if “mal-veiling infraction” is repeated several times”.
This speaker elucidated on another element of this misogynic legislation by saying: “The driver is responsible for whatever happens inside the vehicle and drivers should be held accountable for the clothing of others as well.” Thus the driver has to pay a fine for the “mal-veiling” of other passengers as well.
In a despicable fashion, the clerical regime is resorting to this scheme against women to employ pressure and suppression to force all members of the society to implement the misogynic legislations and confront those who do not observe “hijab”.
This legislation also foresees fines, imprisonment and reduction of wages for female employees on pretext of “mal-veiling”.
According to this plan, “women working in shops… should avoid mixing with men and should work in regular working hours from 7 am to 10 pm. A breach of this article shall be considered a violation and that shop will be closed down for a week by the security forces; and if repeated, it will be closed down for a month.”
Speaker of parliamentary committee on Judiciary and Legal Affairs promised the full readiness of regime’s suppressive forces in implementing this legislation.
During the 36 years of the rule of mullahs’ misogynic regime, Iranian women have suffered of institutionalized discrimination in regime’s laws, including deprivation of freely picking their job and choosing their clothing, and have been battered, humiliated and insulted in the streets of cities of Iran by many suppressive organs that according to Mullah Morteza Hosseini, member of parliamentary committee on Cultural Affairs, number 26.
During Rouhani’s tenure, the pressure and repression of women not only have not receded, but have increased despite the fact that he promised he would give people freedom before he assumed power.
Ms. Sarvnaz Chitsaz, Chair of Women’s Committee of the National Council of Resistance of Iran, urged Iranian women to confront this misogynic legislation. She also called on women’s rights institutions not to tolerate such a suppressive regime that constantly ramps up its violence and oppression of women at United Nations Women body and to demand regime’s expulsion from this organ.

Women’s Committee of the National Council of Resistance of Iran
August 13, 2015