My Pre‏-‏eminent Father, His Eminence the‏ ‏Imam;‎
With greetings, [Chief Justice] Ayatollah Moussavi Ardebili telephoned to raise three ‎Ambiguities about Your Eminence’s recent Decree on the Monafeqin [Mojahedin]:‎
‎1. Does the decree apply to those who have been in prison, have already been tried and ‎sentenced to death, have not changed their stance, but the verdict has not yet been carried ‎out, or it also applies to those who have not yet been tried? Are they also condemned to ‎death?‎
‎2. Those Monafeqin [Mojahedin] prisoners‎
Who have received limited jail terms, and have already served part of their terms, but ‎continue to hold fast to their stance in support of the Monafeqin [Mojahedin]; are they also ‎condemned to death?‎
‎3. As for reviewing the status of the Monafeqin [Mojahedin] prisoners, for provinces with ‎independent judicial systems that do not depend on the central authority, is it necessary to ‎refer the cases to the province’s capital or they can act independently? Your son, Ahmad ‎

Khomeini’s reply:‎
In the name of God, the Most High In all the above cases, if the person at any stage or at ‎any time maintains his [or her] support for the Monafeqin [Mojahedin], the sentence is ‎execution. Annihilate the enemies of Islam immediately. As for review of the cases do ‎whatever that speeds up the implementation of the verdict.‎ 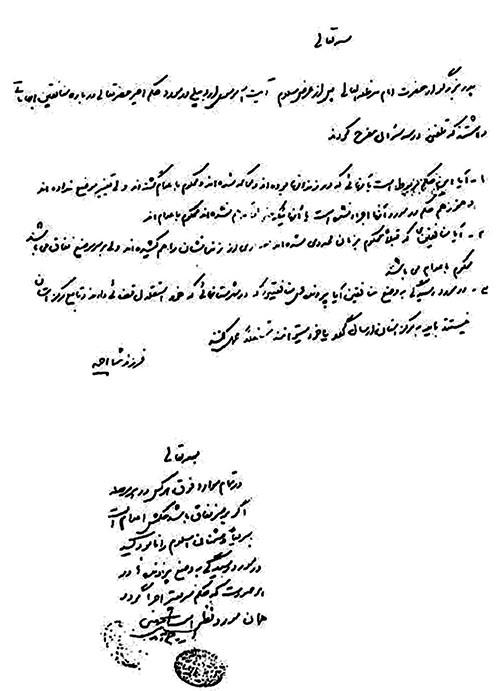 ‎
I subsequently wrote to Ayatollah Moussavi Ardebili, then head of the Supreme Court: ‎‎“Were it not your judges who condemned these prisoners to five or ten years in jail? Were ‎you not responsible? So how is it that you telephone Haj Ahmad and ask him should we ‎execute them in Kashan or in Isfahan? You should have gone to the Imam and told him that ‎if someone has been in jail for some time and has been sentenced to five years, and had no ‎news of Monafeqin’s [Mojahedin] operation, how can we execute him? They have not ‎committed any new crime for which we could try them.”‎
Finally, they executed 2,800 or 3,800 women and men in the country (I doubt which figure ‎is right). Even those who were saying their prayers and fasting were summoned and told to ‎repent. The prisoner would find this offensive and would refuse. Then they would say, so you ‎are steadfast in your position, and would have him executed.‎
One of the judicial officials in Qom came to see me and complained about the head of the ‎Intelligence Department in Qom. He said: The man says let us kill them off as quickly as we ‎can and get rid of them. The judicial official would complain and say: Let us at least look at ‎the file and review the sentence, but the intelligence official would reply: The Imam has ‎issued the verdict; all we have to do is to ascertain that the prisoner is holding fast to his ‎views [Supporting the Mojahedin]. The judicial official told me that they would ask prisoners: ‎Are you still holding to your views? To which the prisoners would respond yes, unaware of ‎the consequences. Then they take them immediately for execution.‎
I finally felt that this was not the correct way of doing things and decided to write a letter ‎to the Imam... I sat down and wrote the following letter:‎