Saudi Shiites refuse to be provoked by suicide bombing

Riyadh (AFP) - They are angry and grief-stricken, but Saudi Arabia’s minority Shiites refused on Sunday to be provoked by a deadly mosque bombing that authorities called an attempt to promote sectarian strife.
King Salman vowed punishment for anyone linked to the "heinous crime," which left 21 people dead.
The interior ministry confirmed the identity of the suicide bomber who blew himself up inside a Shiite mosque in Eastern Province on Friday and said he had links with the Islamic State jihadist group.
It was the deadliest attack in years to strike the Sunni-dominated kingdom, and marked the first time IS had claimed an attack in Saudi Arabia.
"No, no, no... There is no action" in the form of retaliation, a Shiite resident who said he lost three friends in the attack in Kudeih village told AFP.
"They just want justice." 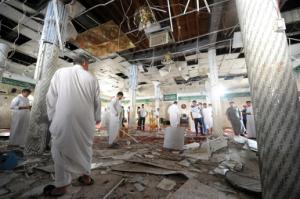 Saudi men survey the debris following a blast at a mosque in the mainly Shiite coastal town of Qatif
Naseema Assada, a resident of Shiite-majority Qatif city near the stricken village, said she visited seven families whose loved ones died in the bombing.
"They are angry at Daesh and radical Sunnis," but not at Sunnis in general, she said, using an Arabic acronym for IS.
Residents said two children were among the dead, and plans were being made for a mass burial.
Demonstrators took to the streets of the region on Saturday to denounce the attack, which residents said occurred despite security checkpoints in Qatif.
In a statement carried by the official Saudi Press Agency late Saturday, the interior ministry identified the bomber as Salih bin Abdulrahman Salih al-Ghishaami, a Saudi national.
"He was wanted by security services for belonging to a terrorist cell receiving directions from Daesh abroad," the ministry said.
The militant group had already claimed Friday’s attack but identified the bomber as Abu Amer al-Najdi.
"The cell was discovered last month, and so far 26 of its members, all Saudi nationals, have been arrested," the interior ministry said, raising the number of wounded from 81 to 101.
In a telegram to Crown Prince Mohammed bin Nayef, who is also the interior minister, King Salman pledged the perpetrators would be brought to justice.
"Anyone taking part, planning, supporting, cooperating or sympathising with this heinous crime will be held accountable, and will be subject to legal accountability. He will receive the deserved punishment," the king said in the message carried by the official Saudi Press Agency.
"We were... pained by the intensity of this terrorist crime that contradicts the values of Islam and humanity" and which targeted innocent civilians, he added.
Since late March, Saudi Arabia has also led a coalition bombing Iran-backed Shiite rebels who seized large parts of Yemen and have sent deadly shell fire into Saudi Arabia.
Political and religious leaders in the kingdom, and its media, were unanimous in denouncing the mosque bombing.
The interior ministry said the attack against "honourable citizens was carried out by tools controlled by foreign forces that aim to divide the unity of society and pull it into sectarian strife".
Saudi Arabia’s top cleric, Grand Mufti Sheikh Abdul Aziz al-Sheikh, called it a "criminal act" which targeted national unity.
Most of the kingdom’s Shiites live in the east, where the vast majority of the kingdom’s oil reserves lie but where Shiites have long complained of marginalisation.