-
The threat on the life of the 26-year-old Iranian women sentenced to death for stabbing a man in self-defense looms as the 10 day delay in her execution ends on Wednesday.
The Iranian regime postponed Rayhaneh Jabbari execution who had been sentenced to death for having stabbed in self-defense an employee of the Iranian regime’s notorious Ministry of Intelligence and Security (MOIS), when he tried to impose himself on her.
A state-run website in Iran wrote on Tuesday Reyahneh Jabbari must be executed unless she obtains the consent of the man’s family.
ShafafNews website report said: “The claims of her acting on self-defense has been rejected by the judiciary.”
Following information about the transfer of Ms Jabbari to Gohardasht notorious prison for her execution, international human rights organizations as well as a group of members of the European Parliament called for urgent action to save her life.
A statement issued by the U.S. State Department Spokesperson Jen Psaki said Washington is deeply troubled by reports that Iranian authorities are finalizing plans to execute Reyhaneh. She noted that "Such an execution would mark a severe violation of the fair trial guarantees afforded to Ms. Jabbari under Iranian law and Iran’s international obligations."
A European Union spokesperson said on October 4, 2014: "We are deeply concerned about reports on the imminent execution of Ms. Reyhaneh Jabbari, who was sentenced to death for the killing of a man.”
“According to her, she acted in self-defense while he tried to sexually assault her. We urgently ask the Iranian authorities not to execute Reyhaneh Jabbari and grant a retrial as questions have arisen about the integrity of the trial.”
Following the international outcry Ms Jabbari’s execution was postponed for 10 days.
When Hassan Rouhani’s Minister of Justice was asked on Monday about the possibility of Jabbari’s execution as sacred month of Muharram approaches, Mustafa Pourmohammadi said: “Muharram will not begin in ten days.”
Mostafa Pourmohammadi appointed by ‘moderate’ Hassan Rouhani as the minister of ‘justice’ was a member of the ‘Death Commission’ that carried out the executions tens of thousands in a few weeks in what is known to be as the 1988 massacre of political prisoners in Iran. 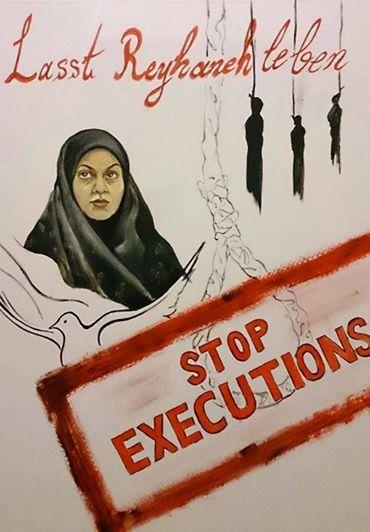