The province covers an area of approximately 47,830 km², it has a population of around four million people. The historical city of Tabriz is the most important city of this province, culturally, politically, and commercially. The province has common borders with the current Republics of Azerbaijan, Armenia and Nakhchivan. A fine network of roads and railways connect East Azerbaijan to other parts of Iran and also to the neighboring countries.
The highest peak of East Azerbaijan is Sahand Mountain at 3,722 m of elevation, lying south of Tabriz, whereas the lower lying areas are around Garmadooz (Ahar).
Generally speaking, East Azerbaijan enjoys a cool, dry climate, being in a mountainous region. But the gentle breezes off the Caspian Sea have some influence on the climate of the low-lying areas. Temperatures run up to 8.9 °C in Tabriz, and 20 °C in Maraqeh, in the winter dropping to -15 °C at least (depending on how cold the overall year is). The ideal seasons to visit this province are in the spring and summer months. 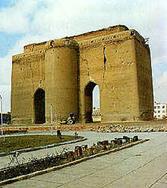 East Azerbaijan is one of the most archaic territories in Iran. During the reign of Alexander of Macedon in Iran (331 BCE), a warrior known as Attorpat led a revolt in this area, then a territory of the Medes, and thereafter it was called Attorpatkan. Since then this vicinity has been known as Azarabadegan, Azarbadgan and Azarbayjan.
Islamic researchers proclaim that the birth of the prophet Zoroaster was in this area, in the vicinity of Lake Orumieh (Chichesht), Konzak City. Needless to say, this province was subject to numerous political and economical upheavals, attracting the interest of foreigners. The Russians in particular have tried to exert a lasting influence in the region over the past 300 years, occupying the area on numerous occasions. The constitutionalist movement of Iran began here in the late 19th century.

The most outstanding features from a cultural point of view are the language, Azari/Azerice, and folklore of this region. According to Dehkhoda Dictionary, the language of Azerbaijan is originally "a branch of the Iranian languages known as Azari" (see Ancient Azari language).However the modern Azeri language is a Turkic language very closely related to the language of Republic of Azerbaijan and Turkey.
Iran’s Cultural Heritage Organization has registered 936 sites of historical significance in the province. Some are contemporary, and some are from the antiquity of ancient Persia. "Zahak Citadel", for example, is the name of an ancient ruin in East Azerbaijan, which according to various experts, was inhabited from the second millennium BC until the Timurid era.
East Azerbaijan is hailed as a rich compendium of Azeri traditions. Many local dances and folk songs continue to survive among the various peoples of the province. As a longstanding province of Iran, Azerbaijan is mentioned favorably on many occasions in Persian literature by Iran’s greatest authors and poets.


Some Major Colleges and universities

Tabriz is the fifth most populated city in Iran, one of the historical capitals of Iran and the present capital of East Azerbaijan Province. It is situated in the Valley of Quru River and its elevation from sea level is about 1,350 meters. The valley opens out into a plain that slopes gently down to the north eastern end of Lake Urumia, 60 kilometres (37 miles) to the west. With cold winters and temperate summers the city is considered a summer resort.
The estimated population of the city is around 3,000,000 based on results of the Iranian census bureau. It is a major hub for heavy industries including automobile, machine tools, oil and petrochemical and cement production.
With a rich history, Tabriz contains many historical monuments, but repeated devastating earthquakes and several invasions during frequent wars have substantially damaged many of them. Many monuments in the city date back to the Ilkhani, Safavi, and Qajar eras, among them is the large Tabriz Historic Bazaar Complex which is inscribed as a World Heritage Site in 2010. The oldest sign of the civilization in the city is an excavation site and museum in the city center with a history that dates back 2500 years.

Some archaeologists suppose that the Garden of Eden was probably located in Tabriz. Tabriz has been chosen as the capital for some rulers commencing from Atropates era and his dynasty.
A recent excavation at the site of the Iron Age museum, in the north of the Blue Mosque site, uncovered a grave yard of 1st millennium BC. The new finding connects the history of civilization in the city to the 1st millennium BC. More likely the city has been destroyed several times either by natural disasters or by the invading armies.
The earliest elements of the present Tabriz are claimed to be built at either at the time of the early Sasanids in the 3rd or 4th century AD, or later in the 7th century. The Middle Persian name of the city was T’awrēš.
After the conquest of Iran by Muslims, Tabriz, then a small village, was resided by a Yemeni tribe called Azd. After an earthquake destroyed it, it was rebuilt in 791 AD by the Abbasid caliph Harun al-Rashid’s wife, Zobaidah. In the 13th Century AD, it was chosen as capital of the vast Ilkhanid Empire until it was sacked by Timurlane in 1392. Marco Polo, who traveled along the Silk Road passed Tabriz about 1275, describes it as: "a great city surrounded by beautiful and pleasant gardens. It is excellently situated so the goods are brought here from many regions. Latin merchants especially Genevans go there to buy goods that come from foreign lands." 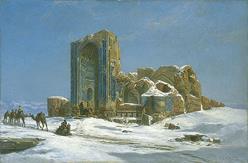 In 1501, Shah Ismail-1 entered Tabriz and proclaimed it the capital of his Safavid state. In 1514, after the Battle of Chaldiran, Tabriz was temporarily occupied by the Ottomans, but remained the capital of Safavid Iranian empire until 1548, when Shah Tahmasp I transferred it to Qazvin to avoid the growing threat of Ottoman army.
Between 1585 and 1603, Tabriz was occupied by the Ottomans but liberated by the Safavid king, Abbas I of Persia after which it grew as a major commercial center, conducting trade with the Ottoman Empire, Russia, central Asia, and India. In summer of 1721 a large earthquake shocked Tabriz. It killed about eighty thousands of its residents. The devastation continued later between 1724 and1725 when the city was invaded by Ottoman army during which about two hundred thousands of Tabriz inhabitants were massacred.
The city was retaken later by the Iranian army. In coming years widespread of the hunger and disease killed more people in the city. In 1780, a major earthquake hit near Tabriz killing over 200,000 people. The tragic devastation reduced the number of inhabitants to about thirty thousand and turned the city to a mere ghost town.

Thanks to the closeness of the west and to communications with nearby countries’ enlightenment movements, Tabriz became the center of the Iranian Constitutional Revolution movements between 1905 and 1911, which led to the establishment of a parliament in Iran. Sattar Khan and Bagher Khan two Tabrizi reformists who led Tabriz people’s solidarity against absolute monarchy had a great role in the achievement of the goals of Iran’s constitutional revolution. During World War I and II, it was temporarily occupied by Russians, Ottomans and Allies. After World War II, aided by the Soviets, a Federalist local government called Azerbaijan People’s Government was set up in north-west Iran having Tabriz as its capital. The government, under the leadership of Ja’far Pishevari, held power for a year from 1946. After the withdrawal of Soviet forces, the federalist government was defeated by the Imperial Iranian army and Iran’s central government took control of the city. Tabriz has been the centre of industrial hub in northwestern Iran ever since.