• UN Security Council must investigate Ward 350 Evin prison attack and group executions
• Call for the release of seven hostages, protection of Liberty and the transfer of residents to the U.S. and Europe
• The Iranian regime must be forced to implement NPT’s Additional Protocol, accept unannounced inspections, and stop its uranium enrichment and missile programs

In a meeting in the French National Assembly Victor Hugo’s salon, in Paris, with participants from all political groups, Maryam Rajavi, the President-elect of the Iranian Resistance, emphasized that the expansion and continuation of the international community’s economic relations with the Iranian regime must be conditional upon an end to violation of human rights, and stopping execution and torture. In this meeting that was held at the invitation of the Parliamentary Committee for Democratic Iran, a number of French lawmakers spoke.
Mrs. Rajavi said while violation of human rights in Iran gets a new and deeper dimension every day, the Iranian regime abuses the business and parliamentary trips to Iran to tell the Iranian people and political prisoners that despite torture and execution, the West sides with the mullahs’ regime. “Therefore I ask Parliamentarians and business owners, like many in Europe who cancelled their trips to Iran and did not want to give a Carte blanche to the regime for further crimes, to refuse these invitations.”
President -elect of the Iranian Resistance denounced ignoring the brutal April 17 attack on political prisoners in Evin by Western governments and called for an independent international investigation in this regard.
In this parliamentary meeting, held on the eve of the new round of nuclear negotiations with the mullahs, Mrs. Rajavi stressed that the Iranian regime signed the Geneva agreement simply to reduce international sanctions, but this agreement has only postponed the regime’s program to acquire nuclear bomb. The regime was able to maintain its sites and even to enhance its enrichment capacity. Parallel to that, it continues its ballistic missile program without any worry. To ensure that it can not acquire nuclear bomb, the regime must accept the Additional Protocol and unannounced inspections, and to completely stop its enrichment program and nuclear bomb launcher missile program. 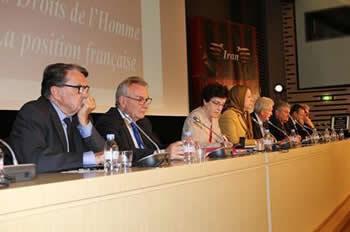 Parliamentarians pointed to the growing repression and executions in Iran and called the notion that Rouhani was a moderate as an illusion. The Members of Parliament stressed that the West’s silence about the brutality of the Iranian regime against defenseless prisoners would give them a free hand to repeat these crimes.
French lawmakers asserted that parliamentary or business delegations’ trips to Iran in such circumstances that the Iranian people and the Iranian Resistance need the support of freedom-loving countries send a wrong message to the religious fascism ruling Iran.
According to the evaluation of the members of the French Parliament, Rouhani is part of the totality of the religious dictatorship and his record in all areas including human rights, terrorism and interference in the countries in the region and trying to loosen the sanctions while continuing the regime’s nuclear program, is dark. He is an advocate and has been enforcing the policies of Khamenei, the Supreme Leader of the clerical regime.
Speakers emphasized that change in Iran is a necessity and support for the organized resistance, and Maryam Rajavi’s ten point plan is the only way to freedom and democracy in Iran.
President-elect of the Iranian resistance congratulated the French President and government for the release of four reporters hostages in Syria and praised the solidarity and unity of the French society and political parties, and called on the French government to play a leading role in protecting the Iranian refugees residing at camp Liberty in Iraq and saving the lives of seven of them, including six women, who were taken hostage in the massacre of September 1, 2013. 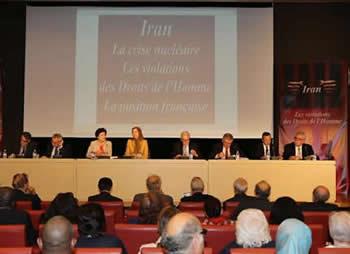 She pointed out the dangers threatening the lives of residents of Liberty and called for an independent investigation into the massacre in Ashraf and Liberty by the United Nations, the U.S and Europe, and reiterated the Iraqi government should be forced to meet the security requirements of Liberty.
She said: We demand the immediate transfer of especially patients and injured residents of Liberty to Europe and America.
Senators Jean-Pierre Michel and Alain Neri and Some lawmakers in the National Assembly who spoke in this session include: Bruno Leroux, head of the socialist group, André Chassaigne, Chairman of the Left Democrats and Republicans, Gérard Charasse, Dominique Lefebvre, Michel Terrot, Pascal Deguilhem, Martine Pinville, et Stéphane Saint-André, and Martine Carrillon-Couvreur.

Secretariat of the National Council of Resistance of Iran
May 6, 2014