By Linda Chavez
Patriot Post, 1 Nov 2013 - The White House welcome of Iraqi Prime Minister Nouri al- Maliki this week couldn’t come at a more awkward time for President Obama , whose fecklessness in foreign affairs will be his most enduring legacy . He has managed to insult our most important allies again and again -- and not just in the most recent cellphone-listening scandal involving German Chancellor Angela Merkel and others. At the same time, Obama has shown weakness to our enemies. But the Maliki visit is in a category all its own.
Iraq is wracked by sectarian violence that is killing more than a thousand Iraq is a month. The level of overall bloodshed in Iraq has given cover to the Obama administration to ignore a deadly attack in which the Maliki government was, at the very least, complicit.
On September 1, death squads invaded a compound that housed Iranian refugees and summarily executed 52 individuals. The 46 men and six women -- most were shot in the head, some while handcuffed -- had been given repeated promises of protection by the U.S. government. In 2003, the U.S.gave written personal guarantees to every member of the group, the Mujahedin e- Khalq ( MEK ), in return for their relinquishing all arms. But when U.S.troops left in 2009 and turned over responsibility for protecting its residents to the Iraq is, Camp Ashraf and its successor Camp Hurriya, where most of the residents were later forced to move, came under repeated attacks. Since 2009, five separate attacks on the two camps have killed 112 residents and injured hundreds more.
But the September 1 attack was the most brazen. According to an independent investigation into the incident by German human rights organization Rights for Migrants, a group of about 120 uniformed men carrying AK-47s came into the camp, which is surrounded by more than a thousand Iraqi military troops and police. From there, the assassins went door to door rounding up residents and destroying millions of dollars in property. They also took seven people, including six women, hostage; they are still being held, likely in Iraq .
The U.S. has refused to hold the Maliki government accountable for this blatant assault on human rights, which could not have occurred without official Iraqi complicity. Instead of demanding the release of the hostages and a full independent investigation of the attack, state department officials repeatedly have said there was “no credible information to date that the Iraqi government was in any way involved.” But a report by human rights lawyer Jared Genser found otherwise. After interviewing survivors and reviewing video footage of the attack, Genser and his co-authors write, “The evidence and the applicable law indicate that the government of Iraq is responsible.”
The Obama administration’s silence on the issue is consistent with its embarrassing overall record on human rights. The president never has made the protection of human rights a priority, but his invitation to Maliki in the face of this shameful incident is especially egregious. Dozens of members of Congress agree. Forty-five House members, Democrats and Republicans, have written the president asking that no further shipment of arms be sent to the Maliki government until it works to obtain the release of the hostages and takes “clear and verifiable steps to protect the remaining residents of Camp Hurriya.” In addition, six senators, including the chairman and ranking member of the Senate Foreign Relations Committee, have written Obama to demand greater protection for the residents from the Maliki government.
At a time when there is little bipartisan agreement on anything, these concerns voiced by both Democratic and Republican lawmakers ought to elicit some response from the White House. The president has hosted other foreign leaders with blood on their hands -- but never before when the victims held personal guarantees for their safety from the U.S. government. Nothing much embarrasses President Obama . But this surely should. 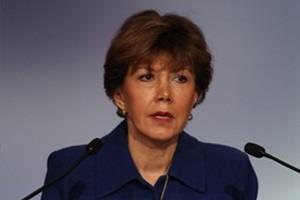