BBC, 14 Oct 2013 - The head of the body tasked with destroying Syria’s chemical weapons says fighting is preventing access to some sites through rebel-held areas.
Ahmet Uzumcu, of the Organisation for the Prohibition of Chemical Weapons, called for local, short-term ceasefires to allow experts to work.
He told the BBC he hoped the Nobel Peace Prize, awarded to the group last week, would help their work in Syria.
Syria officially joins the Chemical Weapons Convention on Monday.
The OPCW and the UN have had a team of 60 experts and support staff in Syria since 1 October. They are based in Damascus and have been carrying regular visits to facilities.
In his first interview since the OPCW won the prize, Mr Uzumcu told the BBC’s Today programme that Syrian officials had been co-operating and facilitating the experts’ work.
He said they had been taken wherever they wanted to go, and that they had already reached five out of at least 20 facilities capable of producing chemical weapons.
However, Mr Uzumcu said, routes to some of the sites went through opposition-held territory and this prevented access.
“They change hands from one day to another, which is why we appeal to all sides in Syria to support this mission, to be co-operative and not render this mission more difficult. It’s already challenging,” he said.
He said he had called for truces because “in the previous, UN-led mission to investigate allegations of use [of chemical weapons] there were temporary ceasefires of four or five hours which helped this mission”.

He added that one abandoned site was located in a rebel-held area, and that his team was hoping to access it.
It is the first time the OPCW has worked in a war zone since it was set up in 1997.
Mr Uzumcu also said that on Saturday mortar shells had fallen “next to the hotel where our team is staying and there are exchanges of fire not far from where they go”.
Details of the visits have not been released. Syria is believed to possess mustard gas, as well as the sarin and VX nerve agents.
Meanwhile, US Secretary of State John Kerry has said a peace conference should be held in Geneva as soon as possible to set up an interim government.
“There has to be a transition government in Syria to permit the possibility of peace,” he said.
The dominant group in the main opposition alliance, the Syrian National Council, has said it will not take part in the proposed peace negotiations - known as Geneva II. 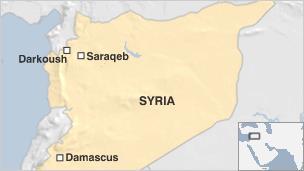 In his interview with the BBC, Mr Uzumcu said the Nobel prize had been a “very big boost” to the morale of his teams. “They are working in very challenging circumstances in the field,” he said.
The OPCW, based in The Hague, was established to enforce the 1997 Chemical Weapons Convention. Its main role to monitor and destroy chemical weapons.
The disarmament deal on Syria’s chemical weapons was sparked by a poison-gas attack in Damascus on 21 August in which hundreds were killed. Western nations blamed the forces of President Bashar al-Assad, but he blamed rebel fighters.
Syria later agreed to join the global Chemical Weapons Convention, and the UN said it would bound by the treaty from 14 October.
Under a UN resolution, Syria’s chemical weapons production equipment must be destroyed by 1 November and stockpiles must be disposed of by mid-2014.
Violence in the country is continuing. On Monday a car bomb killed at least 12 people in the north-western rebel-held town of Darkoush in Idlib province, activists say.
The attack came a day after seven workers of the International Committee of the Red Cross were abducted near Saraqeb, a town also located in Idlib province, near the Turkish border.
Syrian state TV blamed rebels for the abduction. 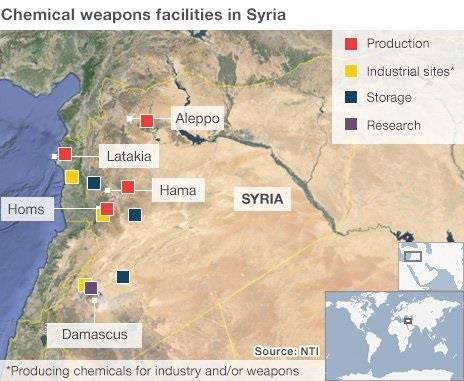