NCRI, 10 Oct 2013 - The National Council of Resistance of Iran (NCRI) says nuclear weaponization research and planning center was being moved to a large, secure site in a Tehran defense ministry complex; accusation comes less than a week before P5+1 nuclear talks in Geneva, Reuters reported on Thursday.
In a news conference in Paris, the NCRI “said on Thursday it had information about what it said was a center for nuclear weaponization research in Tehran that the government was moving to avoid detection ahead of negotiations with world powers.”
The NCRI exposed the Iranian regime’s uranium enrichment facility at Natanz and a heavy water facility at Arak in 2002.
According to the Reuters report: “The Paris-based NCRI, citing information from sources inside Iran, said a nuclear weaponization research and planning center it called SPND was being moved to a large, secure site in a defense ministry complex in Tehran about 1.5 km (1 mile) away from its former location.”
|It said the center employed about 100 researchers, engineers and experts and handled small-scale experiments with radioactive material and was in charge of research into the weaponization of nuclear weapons.”
“There is a link between this transfer and the date of Geneva [talks] because the regime needed to avoid the risk of visits by [UN nuclear] inspectors,” Mehdi Abrichamtchi, who compiled the report for the NCRI, told a news conference. 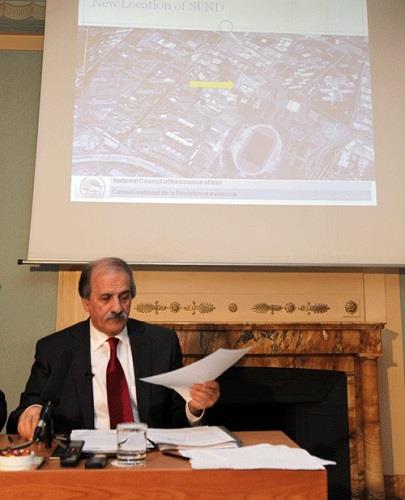