‘They want to annihilate us’

How prophetic his words would become. While the death of all 52 Camp Ashraf residents was heart-wrenching, the assassination of Hossein Madani made my heart quite literally ache.

I felt this pain personally as I had worked closely with Madani at Camp Ashraf in 2005 when I had traveled to Iraq on a fact finding mission with a delegation of members of parliament.

I heard his name read out from a list of names on a day so black I willed the sun to set and tell me it was over.

Later that day video footage emerged of Madani, fallen back against a wall, shot at point-blank range through the head and again through the heart, eyes open, watching.

He was massacred in the early hours of Sept. 1 when the Iraqi government sent a SWAT team on a killing spree at Camp Ashraf, home to 100 members of the People’s Mujahedin of Iran, an Iranian dissident group.

The attack was inevitable. This wasn’t the first but the fifth time the group was attacked since 2009, when protection of the camp was transferred from the United States to Iraq.

The only surprise was in the sheer brutality and cowardice of the assassins.

But I needn’t have been surprised. After all, the Iranian regime is the most savage and inhuman regime of our times. Not content with inflicting three decades of indescribable misery on the Iranian people, the octopus of state sponsored terrorism now has its tentacles in Baghdad to Damascus, Kabul to Ramallah.

Since the inception of the Islamic Republic in 1980, the PMOI has fought tooth and nail for freedom and democracy in Iran. This resistance has cost them dearly. In the summer of 1988, more than 30,000 political prisoners were executed in Iran and since the revolution of 1979; conservative estimates of the death toll of members and sympathizers of the organization is more than 120,000.

Nevertheless I kept asking myself, why? Why did the Iranian regime order the Iraqi government to massacre the PMOI and then celebrate the assassinations in the media? Why do “they want to annihilate us” as Madani foresaw?

I draw one conclusion, fear.

Cornered and cowering, the Iranian regime is engulfed in an internal and international crisis. Inflation in Iran is more than 40 percent, more than 8 million people are unemployed and temperatures are rising. Internationally, the regime is under increasing pressure to give up pursuit of nuclear weapons and it’s hemorrhaging blood in Syria. The fall of Assad would mark the eve of the end of the ayatollahs; they cannot afford to lose.

Engulfed in this crisis, the Iranian regime fears the PMOI now more than ever. Why else would they order the massacre of unarmed and defenseless civilians?

Consequently the attack on Sept. 1 was a message from the Iranian regime to the Iranian resistance. Give up and live or die standing. Fifty-two members of the People’s Mujahedin of Iran sent a clear message back in their blood. The Iranian people and their resistance movement will never bow down to tyranny and will never waiver from their belief in the inalienable right to freedom and democracy.

I grieve for the 52 Ashraf residents slain on Sept. 1. My heart grows heavy when I think that they will never see the sun rise over Damavand, never swim in the Gulf of Persia, never smell the flowers in the gardens of Isfahan, never drink tea in Tehran, never walk through the ruins of Persepolis, or listen to poetry recited at the tomb of Hafez. They will never feel the heat of the desert at the Dashte Kavir, never see the land of Saadi and Rumi.

But above all, I weep that they will never know the joy of walking barefoot in Iran, to feel the earth between their toes. A country and a people they loved more than life itself.

When the days are black and my heart is close to breaking, I smile and think of sunflowers. My grandfather leads me by the hand through a field of sunflowers in Iran. Did you know that hundreds of sunflower seeds spiral out in a circle from just one flower, he says.

And he is right. For every Madani, there are hundreds more ready and willing to pick up the torch and march toward freedom. Iran will be free. I’m not hoping for the day, I’m living for it with absolute certainty in my heart. So while it pains me that the residents of Ashraf paid the price for Iran’s freedom with their blood, it makes my heart sing knowing 75 million Iranians will know freedom because of the self-sacrifice of so few. 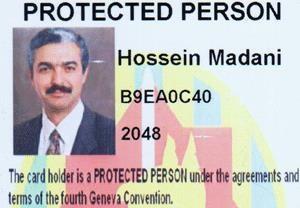 The government of Iraq must be held to account for the assassination of Hossein Madani and the massacre of 51 others at Camp Ashraf. Furthermore it is incumbent on the international community to make all necessary representations to the government of Iraq to immediately release seven hostages kidnapped during the Sept. 1 attacks, six of whom are women. These hostages must be released without delay.

Only with the immediate deployment of U.N. peacekeepers and a U.S. monitoring team at Camp Liberty, can we be assured of the safety of the surviving camp residents.

(Azadeh Zabeti is vice president of the Committee of Anglo-Iranian Lawyers and a commentator on Iran.)