Reuters, Vienna, 15 Jan 2013 - The U.N. nuclear watchdog said on Tuesday it hoped to gain access to the Parchin military site during a visit to Iran this week aimed at unblocking an investigation into suspected atom bomb research in the Islamic state.

The International Atomic Energy Agency will seek to finalize a framework deal with Iran in Wednesday’s talks in Tehran that would enable it to relaunch its inquiry, IAEA Deputy Director General Herman Nackaerts said.

“We are approaching these talks in a constructive spirit ... and we trust that Iran will work with us in the same spirit,” he said at Vienna airport before his team departed for Tehran for a new round of what have been long-fruitless negotiations.

World powers striving to resolve a decade-old dispute over Iran’s atomic work and avert the threat of a new Middle East war will scrutinize the IAEA-Iran talks for any indication of an Iranian readiness to finally start addressing their concerns.

Uncertainty reigns over when the powers - the United States, France, Germany, China, Russia and Britain - and Iran will resume their separate negotiations aimed at finding a broader diplomatic solution.

Israel - a U.S. ally believed to have the Middle East’s only nuclear arsenal - has threatened military action if diplomacy and economic sanctions intended to curb Iran’s uranium enrichment program do not resolve the stand-off.

Iran, a major oil producer and exporter, says its nuclear work is an entirely peaceful project to generate an alternative source of energy for a rapidly expanding population.

The IAEA, whose mission it is to prevent the spread of nuclear weapons in the world, has been trying for a year to negotiate a so-called structured approach with Tehran that would give it access to sites, officials and documents in Iran.

Both the IAEA and Tehran have said progress was made at their last meeting in mid-December.

“We are aiming to finalize the structured approach to resolving the outstanding issues on the possible military dimensions of Iran’s nuclear program,” Nackaerts said.

The IAEA’s immediate priority is to visit the Parchin military facility southeast of Tehran, where it suspects explosive tests relevant for nuclear weapons may have taken place, perhaps a decade ago. Iran denies the allegation.

“We hope that we will be allowed to go to Parchin and if access is granted we will welcome the chance to do so,” Nackaerts said. “We are ready to go.” 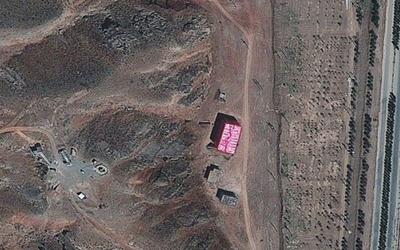 Parchin site after being razed

Some members of the IAEA team carried metallic cases, apparently with equipment they would need to inspect Parchin for any traces of illicit nuclear-related activity there.

Western diplomats say Iran has worked for the past year to cleanse Parchin of any incriminating evidence, but IAEA chief Yukiya Amano said late last year a visit would still be useful.

Iran, which rejects accusations of a covert bid to develop the means and technologies needed to produce nuclear arms, says it must first reach a framework accord with the IAEA on how the inquiry should be done before providing any Parchin access.

It says Parchin is a conventional military facility and has dismissed accusations that it “sanitizing” the premises.

Parchin “has nothing to do with nuclear activities,” Foreign Ministry spokesman Ramin Mehmanparast said in Tehran.

Iran is ready to remove “any ambiguities” over its nuclear program, state television quoted him as saying. But he also appeared to link this to what he called a recognition of Iran’s nuclear “rights”, meaning work including uranium enrichment.

Washington says Iran does not automatically have the right to refine uranium under international law because, it argues, Tehran in the past concealed sensitive nuclear activity contrary to its safeguards agreement with the IAEA.

A report by U.S. nonproliferation experts this week said Iran could produce enough weapon-grade uranium for one or more nuclear bombs by mid-2014, and that Washington and its allies should intensify sanctions.

Analysts and diplomats see a window of opportunity for world powers to make a renewed diplomatic push to find an overall negotiated solution to the dispute after U.S. President Barack Obama won re-election in November.

The six powers want Iran to scale back its uranium enrichment program and cooperate fully with the IAEA. Iran wants the West to first lift sanctions hurting its economy.

Both sides say they want to resume talks soon, but have yet to announce a date and venue.

“There is nothing more important in defining the framework for our nuclear activities than the leader’s fatwa,” Mehmanparast said. “This fatwa is our operational instruction.”

Khamenei’s fatwa, according to a September 2012 report by the Fars news agency, prohibited the production, stockpiling and use of nuclear weapons and said they contradict “Islamic beliefs and the principles of the Islamic Republic of Iran”.