Maryam Rajavi: I hope the French government stands against mullahs’ dictatorship and leads the policy of change in Iran and bringing about freedom in this country

On January 13th a grand session was held in Auver-sur-Oise, near Paris, with more than a thousand elected representatives, mayors and residents of Val-d’Oise province participating. Mrs. Maryam Rajavi, President-elect of the Iranian Resistance, congratulated the people of France, especially supporters of the Iranian Resistance in this country, on the New Year. Dominique Lefebvre, Member of Parliament; Jean-Pierre Béquet, Mayor of Auvers-sur-Oise; Jean-Paul Jeandon, Mayor of Cergy; Gilbert Marsac, Mayor of Jouy-le-Moutier; Jean-Pierre Muller, Mayor of Magny-en-Vexin and Michel Valade, Mayor of Pierrelaye were among the speakers in this event.
Mrs. Rajavi, the keynote speaker in the event, briefly reviewed the successes of the Resistance in 2012, including the Iranian Resistance removal from the blacklists of the United States and Canada.
“We begin 2013 with many hopes, and all are in reach. The time has come to deliver the final blow to fundamentalism in Iran. We must grasp this opportunity which is a historic moment for the people of Iran, the region and the world,” she said. 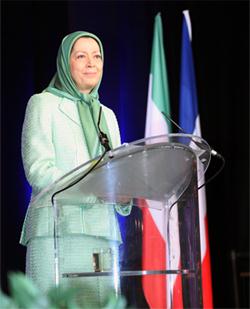 “This year there is a tense situation in Iran and the mullahs are feeling the threat because they see themselves surrounded by the Iranian people. This is the source of the whole impasse they are facing: the dead-end in the nuclear program; the dead-end in the internal power disputes, the dead-end regarding the June election, and the dead-end in their relations with the international community. There is no possible solution from inside this regime. The only solution is regime change,” Maryam Rajavi explained regarding the mullahs’ fate.
“If the international community took actions to sanction the mullahs’ regime in 2012, now the world must stand alongside the Iranian people and support them to overthrow the fundamentalist dictatorship,” she said.
Mrs. Rajavi also called on the international community to recognize the rights of members of Iranian Resistance in camps Ashraf and Liberty in Iraq, including their right to freedom, freedom of movement and their right to property.
Referring to the nearing prospect of the overthrow of Bashar Assad’s dictatorship by the Syrian people, Maryam Rajavi said, “The Assad dictatorship overthrow is part of the overthrow trend of Tehran’s mullahs.”
Maryam Rajavi expressed hope that the French Government will pioneer a policy in the international community that will stand against the religious dictatorship in Iran and defend change and the establishment of freedom in this country. 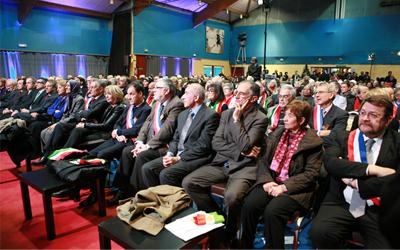 In this session a group of mayors from the Val-d’Oise Province, along with Jean-Pierre Béquet, member of the Val-d’Oise Council and the mayor of Auvers-sur-Oise, introduced a declaration signed by 3000 French mayors and elected representatives. This declaration calls on the French Government and the European Union to support the 10 point plan of Mrs. Rajavi in defense of universal values and recognize the Iranian Resistance in bringing about fundamental freedoms and democracy in Iran.
In this declaration, French mayors and elected representatives also called on the international community to support the rights of members of the Iranian Resistance at camps Ashraf and Liberty in Iraq and to recognize Liberty as a refugee camp.
In his speech at the meeting, Jean-Pierre Béquet said: “What we wish for the New Year first of all is that Iranian people be freed of the tyrannical regime rule. Madam President, all the Mayors and Representatives who are with us here stand beside you. You have been welcomed all around the world for several months and are greeted by all parliamentarians. Your campaign has gained great success. The National Council of Resistance of Iran is known now and is looked at as a credible alternative.”
In the gathering, representative of Val-d’Oise Dominique Lefebvre, while supporting this call, said: “In year 2012 significant progress was made. Year 2013 must be the same or better. We think it is possible because the Iranian regime is afraid. It is afraid of what is occurring in Syria. It is afraid of the Iranian Resistance. That is why the regime put pressure on western governments and democracies and they yielded to the pressure to some extent. It is absolutely essential to recognize the Iranian people and Resistance. Iranian people have no doubt in their might to overthrow the mullahs’ regime when they have such an organized, competent and admirable resistance movement beside them.”
In addition to dozens of mayors and elected representatives from Val-d’Oise, Mgr. Jacques Gaillot, French progressive priest, also took part in this session and wished for a successful year for the Iranian Resistance and the freedom of the Iranian people from dictatorship.

Secretariat of the National Council of Resistance of Iran
January 14, 2013