Arab dignitaries attending a conference in Ashraf 3 in support of a free Iran - July 14, 2019 - Tirana, Albania

Albania, July 14, 2019 - Dignitaries from several countries across the Middle East and North Africa attended a conference in Ashraf 3, home to members of the Iranian opposition group People’s Mojahedin Organization of Iran (PMOI/MEK) in Tirana, Albania. These prominent figures voiced their support for a free Iran and the ten-point plan presented by Iranian opposition President Maryam Rajavi, head of the National Council of Resistance of Iran (NCRI).

The conference was moderated by Anouar Malek, prominent writer and former Syrian correspondent in the Arab Union. 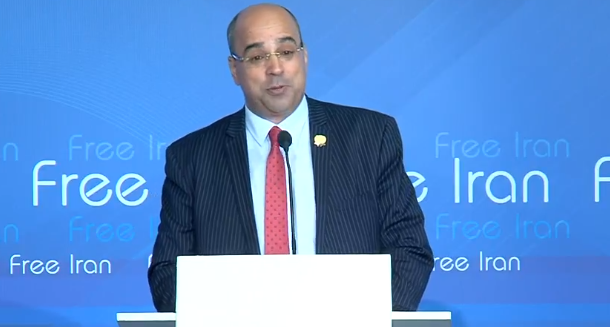 “MEK members are the legitimate representatives of the Iranian people. This movement has stood up to the corrupt mullahs’ regime. This resistance is a legitimate alternative to the regime that can establish freedom in Iran,” said Mr. Anouar Malek, prominent writer and former Syrian correspondent in the Arab Union.

“We express our solidarity with the resistance that is led by Mrs. Maryam Rajavi, who has sacrificed so much in this struggle against the mullahs’ regime… In 1988, many political prisoners were victimized by the regime without committing any crimes,” he concluded. 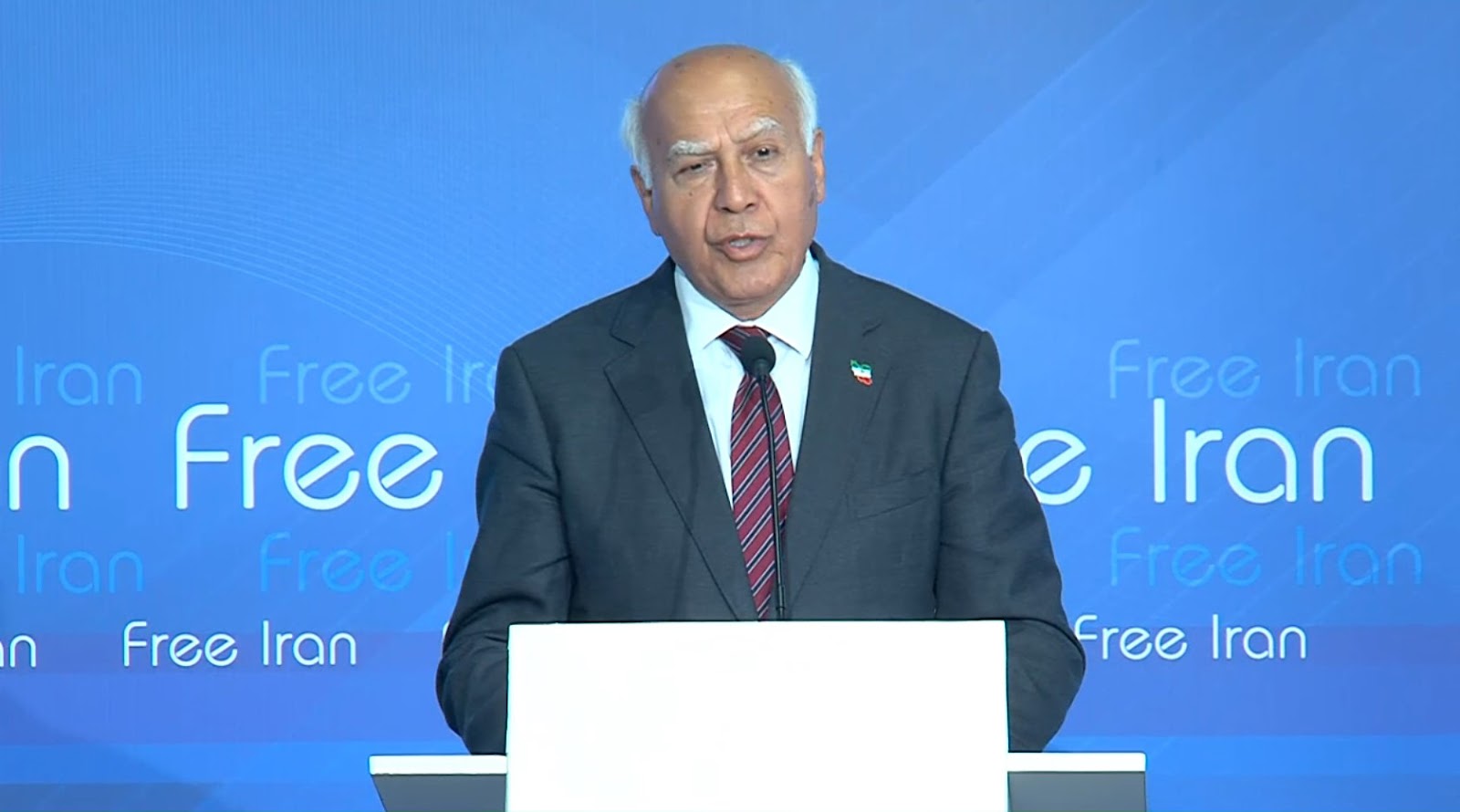 Abbas Davari, Chairman of the NCRI Labor Commission at a conference in Ashraf 3 - July 14, 2019 - Tirana, Albania 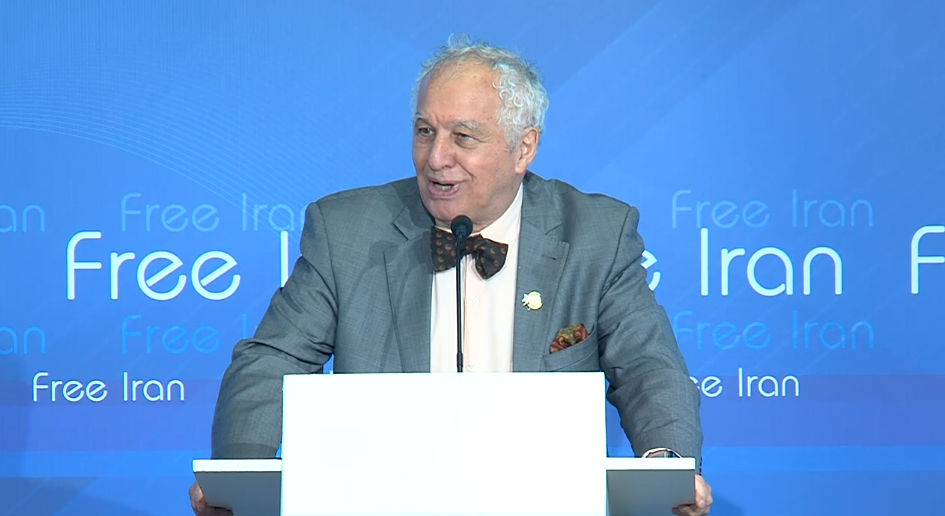 Prime Minister, Sid Ahmed Ghozali attended the Islamic-Arabic conference in Ashraf 3 on July 14, 2019, where he gave a short speech welcoming the Arab delegation to the MEK complex in Tirana, Albania. 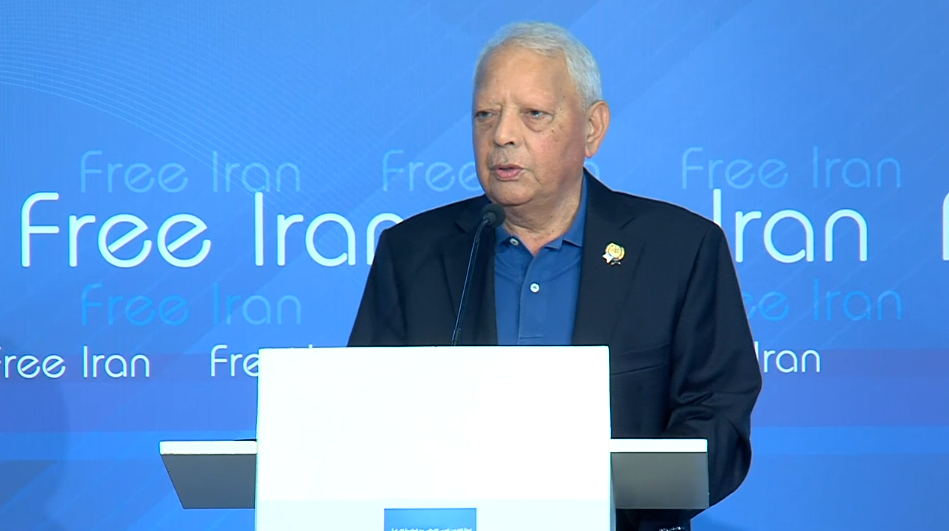 “I would like to express my gratitude to the people and government of Albania for accepting the PMOI/MEK members. When the flag of the PMOI has risen in Tehran, there will be no differences between Iran and Arab countries,” said former Jordanian Minister of Culture Saleh al-Qallab.

“I don’t want to see war and Iran being destroyed because overthrowing this regime is possible without bombardments… The PMOI is now present across the country of Iran. They are the people who will free Iran. The PMOI has a well-organized leadership under Maryam Rajavi. The main force fighting against the regime is the PMOI. All dissidents should come under the PMOI and continue the fight against the mullahs’ regime… If the PMOI are victorious in Iran, we will be victorious across the entire Middle East,” he continued.

“The mullahs’ regime is meddling in all countries of the Middle East and imposing their own mentality… I promise you that you will be in Tehran soon and we will meet each other there,” Mr. al-Qallab concluded. 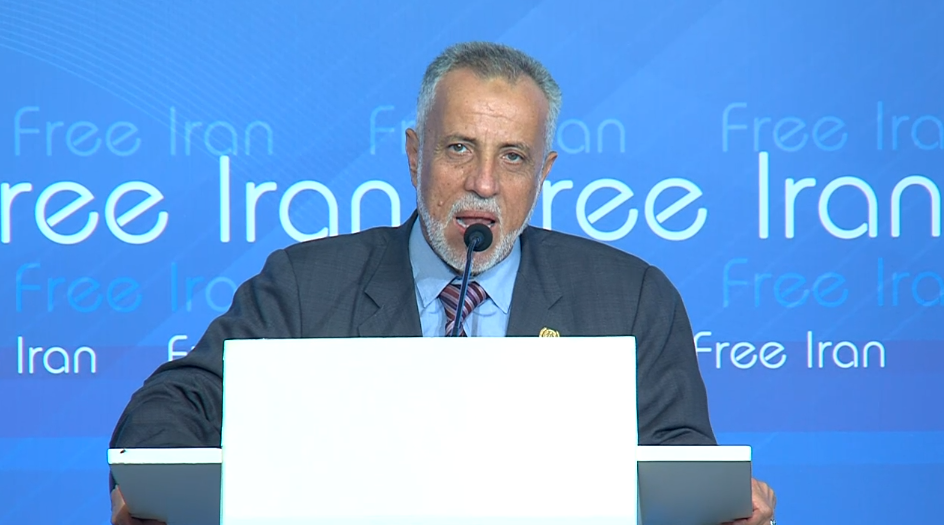 “I want to congratulate you on your achievement in Ashraf 3. When you go to your country under the leadership of Maryam Rajavi, it will be a free country… When you were in Ashraf, I lived with you and your pains. I would like to thank Albania for accepting you,” said Dr. Mohammad al-Haj, an MP from Jordanian.

“Building such a city means that you will be able to rebuild Iran from the clutches of the mullahs… 120,000 PMOI members have been killed by the mullahs’ regime. The people of Iran are suffering under this tyrant regime. The oppression of this regime is in the entire region. It dispatches its Revolutionary Guards (IRGC) to the entire region, conducting sabotage everywhere,” he added.

“The PMOI has a plan to relieve people from poverty and hunger and establish a free Iran. Iran’s oil must be used for the interests of the Iranian people… From Ashraf to Tehran, we will support you to get rid of the mullahs’ regime,” Dr. al-Haj concluded. 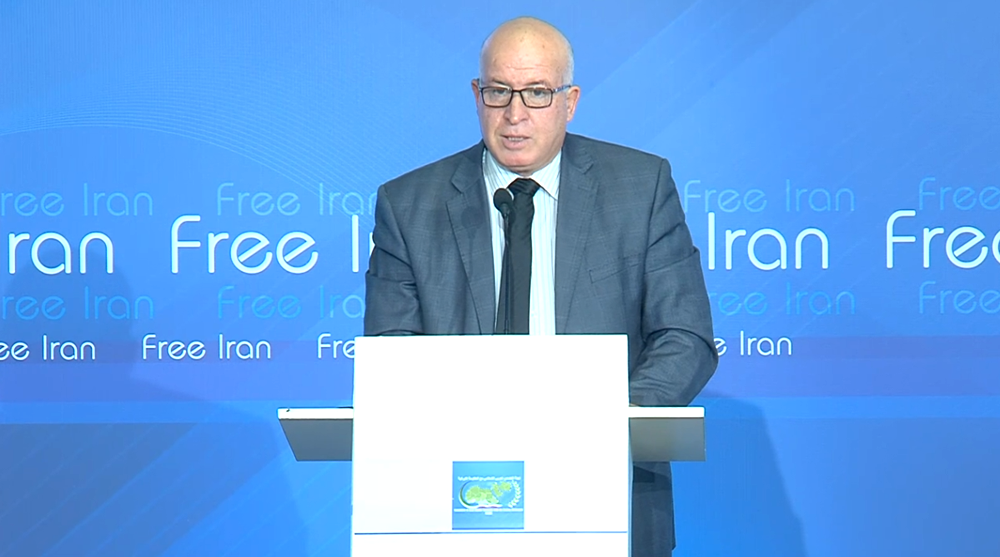 “We have come to Ashraf 3 to express our solidarity and support with the Iranian Resistance. We have witnessed the sufferings of those who survived the regime’s human rights violations. This conference has been held in Ashraf 3, giving you a real picture of the PMOI, their faith, being their most prominent value,” said Dr. Mohammad al-Zobei, MP from Jordan.

“The regime in Iran has been a threat to the entire region since the Khomeini era who exported the so-called revolution… The resistance in Iran should be supported and pressure placed on the regime. Maryam Rajavis’ ten-point plan for peace should be supported,” he concluded. 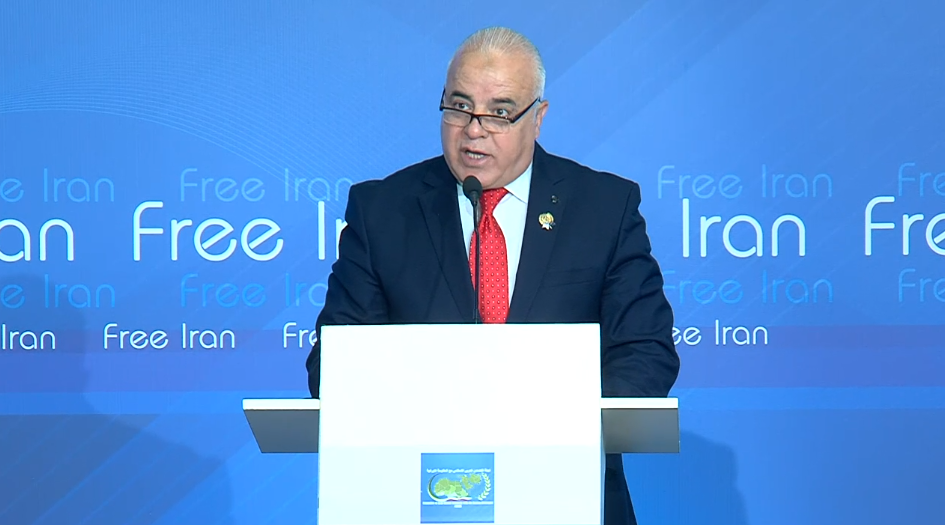 “Ashrafis have such faith to resist and persist against the mullahs’ regime that is against Islam… We know that the regime has endangered the entire region with its ballistic missiles. We thank the PMOI for your resistance and persistence, to bring back Iran to what it deserves,” said Dr. Mohammad al-Yasra, a Jordanian MP. 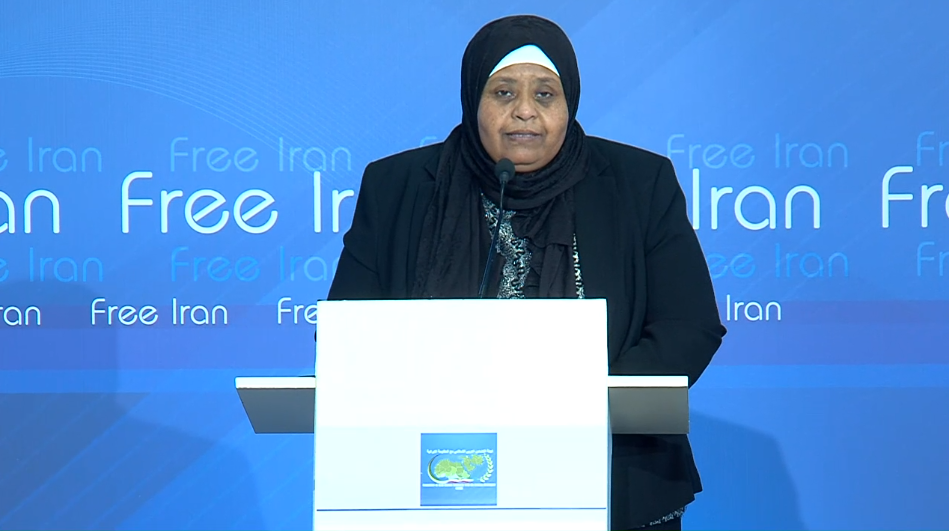 “Albania has hosted this humanitarian project for the PMOI so they can station here under Maryam Rajavi’s leadership. Hearing from the women in Ashraf was very painful, about the tortures and hardships they suffered. I also feel happy that you are present to overthrow the regime…” said Dr. Najah Al Azzeh, former MP from Jordan.

“Mrs. Maryam Rajavi, dear brothers and sisters, I hope that you will go to your country and achieve your ideal there,” she concluded. 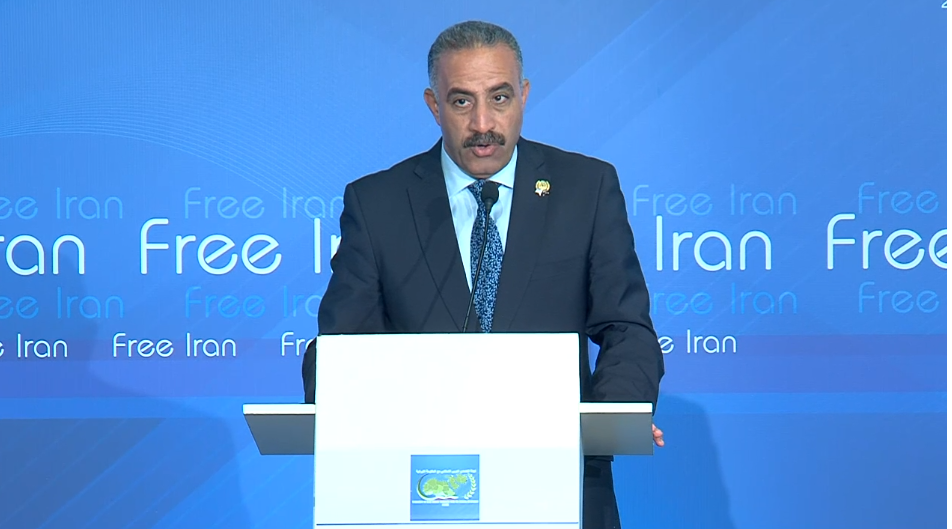 “I offer my great appreciation to Mrs. Maryam Rajavi. She is the one who has taken such a major responsibility. All the pains of the oppressed, the poor, the youth who can contribute to the building of their country,” said Jordanian MP Wasfi Haddad.

“In the exhibition here we witnessed the Iranian regime’s horrible crimes. As a Christian, I express my solidarity for the freedom and happiness of Iran. The great people of Iran have stood up to achieve their goals. We believe this organization, which have sacrificed so much, can endure the responsibility of the future of Iran. I would also like to thank the Albanian government and people for accepting this group of my brothers and sisters. I wish you all success and see you in dear Iran,” he concluded. 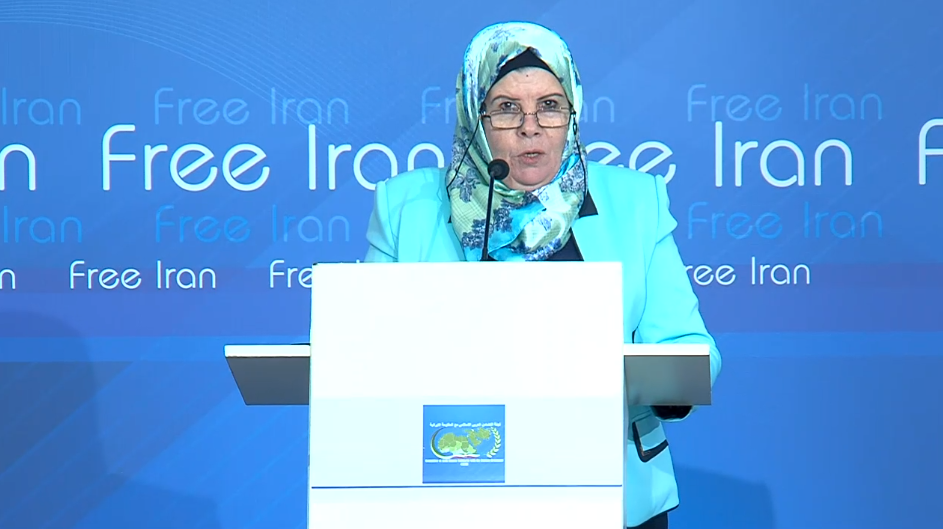 “The Iranian regime has extended its crisis to all countries. The mullahs suppress minorities and women. Millions of people are unemployed in Iran under the mullahs’ regime and suffering in poverty and hunger. All terror attacks in the Middle East are the acts of this regime,” said former Jordanian MP Naayem Salameh.

“I would like to admire the role of Iranian women who have been under the suppression of this misogynist regime for 40 years. I am very happy that I can see the Ashrafis in person in Ashraf 3. I call on all countries to support Madam Rajavi so that peace and security will be established in Iran,” she concluded. 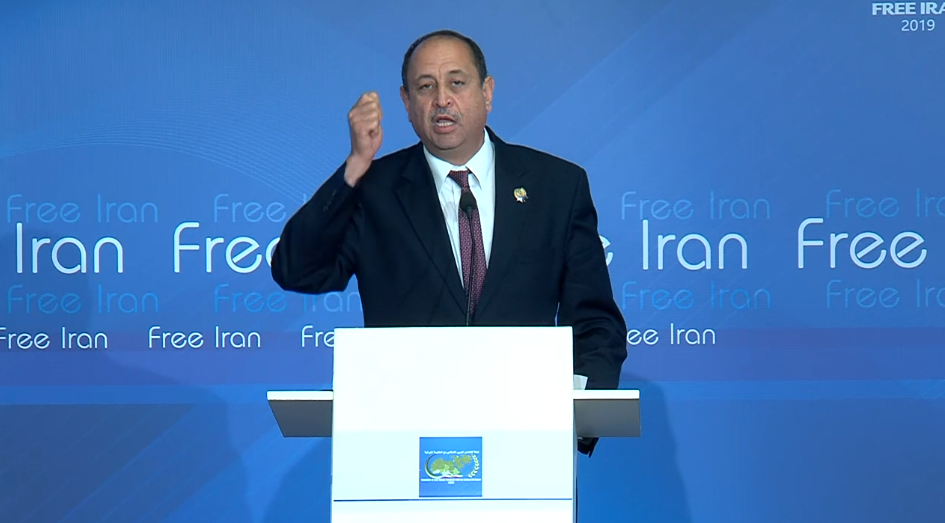 Dr. Issa Khashashna, a Jordanian Member of Parliament, at a conference in Ashraf 3 - July 14, 2019 - Tirana, Albania

“We have come here to say to the mullahs that this regime must go. This regime shouldn’t ignore the values of the people of Iran and the region. I hope we meet each other in Tehran, the Ashraf of Maryam, God bless you,” Dr. Khashashna concluded. 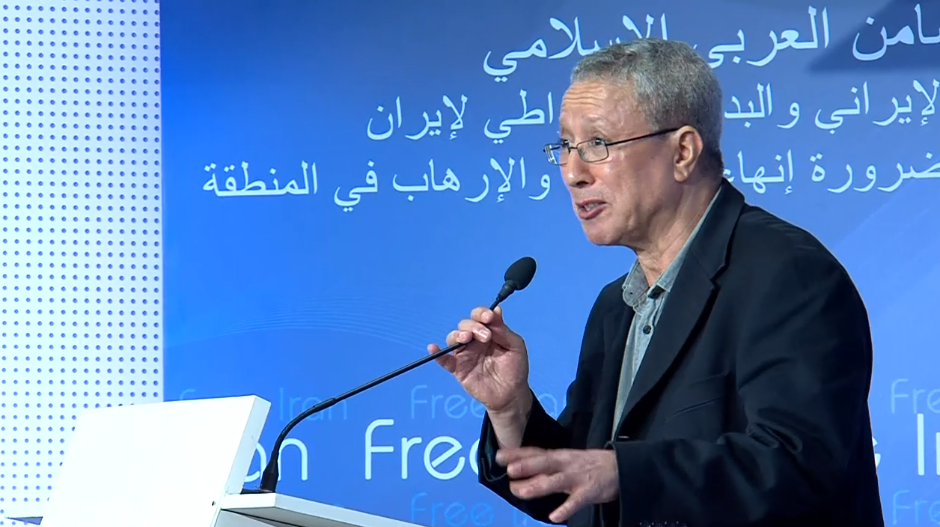 “When the U.S. military left Iraq, it left the Iraqi army with the Iranian regime’s IRGC. In all countries where Tehran has meddled in, we can see the IRGC’s presence. We should return the war on the Iranian regime by supporting the Iranian Resistance and its goals… Our Arab countries are also occupied by the Iranian regime,” said Dr. Tahar Boumedra, former UN representative for human rights in Iraq.

Haitham Al-Maleh of the Syrian opposition 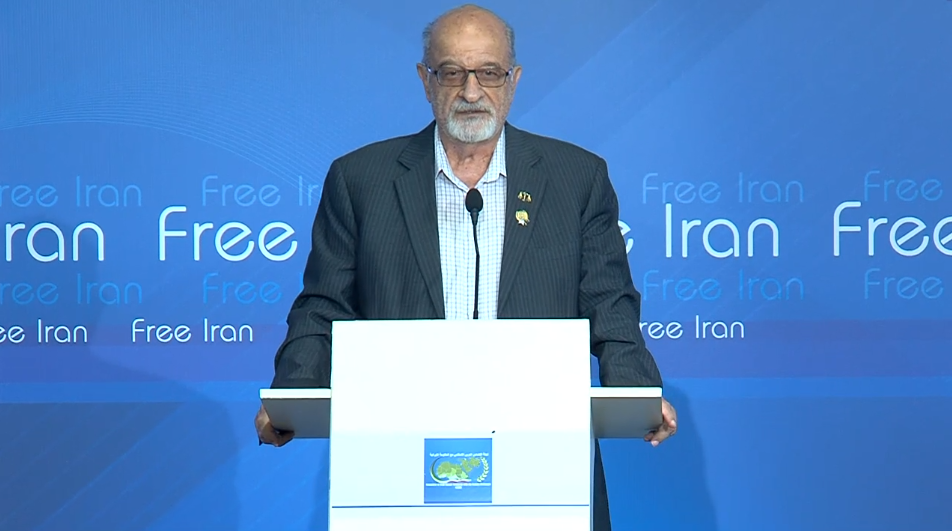 Haitham Al-Maleh of the Syrian opposition at a conference in Ashraf 3 - July 14, 2019 - Tirana, Albania

“The mullahs’ regime has imposed so many troubles upon the people of the region. Khomeini created something that has nothing to do with Islam. Unfortunately, against all international law, Khomeini’s regime has fomented wars across the region and terrorist groups now acting under the banner of Islam are supported by the mullahs’ regime,” said Haitham Al-Maleh of the Syrian opposition.

“The Iranian regime sought to destroy all regional countries. To whose benefit is to destroy Iraq? Tehran didn’t stop there and extended to Syria, Lebanon, and other countries. As long as this regime is in power, destruction will continue across the region. Therefore, we should support the PMOI under the leadership of Mrs. Maraym Rajavi,” said Mr. Maleh.

“We have had more than one million martyrs killed by Bashar Assad and his forces. Several million have been wounded. Millions of women have been imprisoned, tortured and raped. 90 percent of our hospitals and schools have been destroyed. Nearly six million are refugees in other countries. There are several million displaced inside Syria. How can one tolerate such a catastrophe in Syria, and prior to that in Iraq and Yemen?” he asked.

“I name myself an Ashrafi because it carries the torch of freedom all over the world. When I call myself an Ashrafi, that means I have joined the freedom movement for dignity. The dignity I hope everyone will enjoy. I announce that I support the NCRI and Madam Rajavi, and hopefully she will be in Iran soon,” Mr. Maleh concluded. 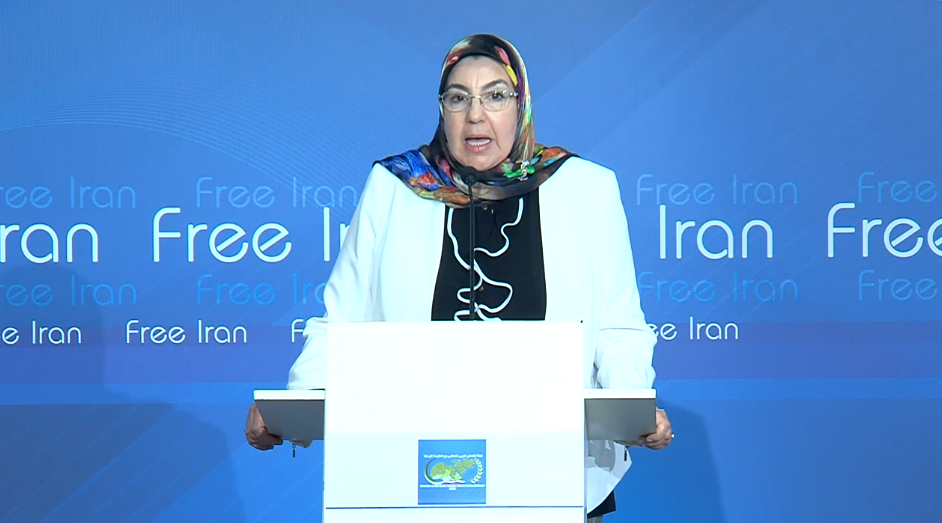 “I salute all residents of Ashraf 3. This conference is about Islamic-Arabic solidarity. I think Ashraf 3 should have a representative in the United Nations. You have a strong, endless will and determination. Those who don’t give up are the real victors. PMOI members did not give up or surrender. We are with you with our hearts. All Western countries support you and we have to see who is responsible for all this destruction in Arab countries,” said Mrs. Khadija Ziyani, MP from Morocco.

“I would like to express my support for you. We are with you with all of our faith and have the utmost respect for Maryam Rajavi. We have solidarity and cooperation with this cause,” she concluded. 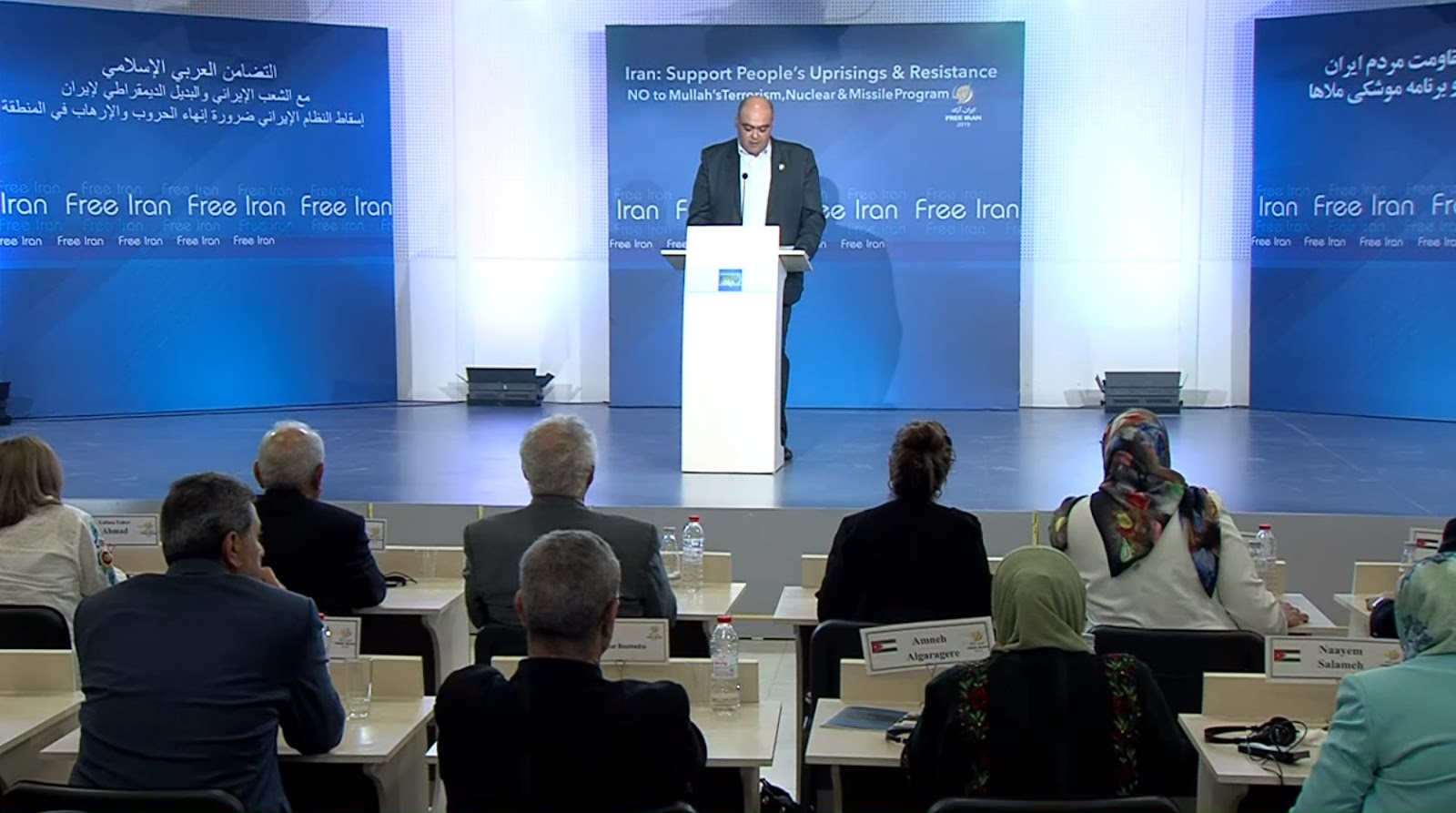 “All nations of the region are suffering. Many people have been exiled from their countries. Mrs. Rajavi is realizing the role of women for the future of Iran… We are calling for peace, freedom and in order to defend human dignity and create bridges peaceful coexistence, we believe in the right of human beings,” said Tunisian MP Abdelkader Ben Dhifallah.