عکس ویژه
Norooz OR Nowruz (Persian: نوروز‎) is the traditional Iranian new year holiday. It is the most cherished of all Iranian festivities. Norooz marks the first day of spring and the beginning of the Iranian solar calendar. It is celebrated on the day of the astronomical vernal equinox (start of spring). The word comes from the Old Persian meaning “new day/daylight”.
What we have today as Norooz goes back to the Sassanid period. They formed the last great Persian Empire before the advent of Islam. Their celebrations would start ten days prior to the New Year. They believed the guardian angels and spirits of the dead would come down to earth within these ten days to visit humans. A major spring-cleaning was carried out to welcome them with feasts and celebrations. Bon fires would be set on rooftops at night to indicate to the spirits and the angels that humans were ready to receive them. This festival was called Suri.
The oldest records of Norooz go back to the King Yima of Eastern Persia back as far as 5000 BCE. It later became the national holiday of Arsacid/Parthian Empires who ruled western Iran (247 BCE-224 CE). Norooz was most honored by the early founders of Islam and even the Turkish and Mongol invaders did not attempt to abolish Norooz. However, the clerical fundamentalist regime currently ruling in Iran has tried its best to push traditional Persian celebrations to the sidelines but to no avail; it has been vehemently resisted by the Iranian people, much as the dark ideology and the rule of the mullahs. 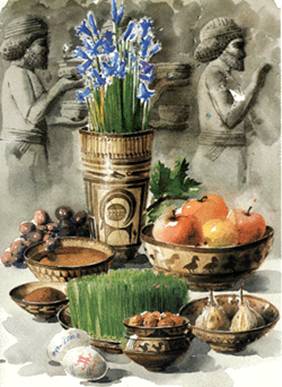 The traditional herald of the Norooz season is called Hâjji Fîrûz. He symbolizes the rebirth of the Sumerian god of sacrifice, Domuzi, who was killed at the end of each year and reborn at the beginning of the New Year. He usually uses face paint to make his skin black and wears a red costume. Then he sings and dances through the streets with tambourines and trumpets spreading good cheer and heralds the coming of the New Year.
On the New Year s day, families dress in their new garments and gather around the table of Haft Seen and await the exact moment of the arrival of the spring which is usually announced with the thunder of a cannon heard on radio or TV. At this time children receive their gifts which is traditionally brand new paper money and in better to do families gold coins.
Shortly afterwards visiting the relatives begins with a visit to the eldest relative, usually the grandparents or at times the great grandparents, and then the rest of the relatives and finally the friends. These are usually short visits and consume the first few days of the New Year. There are twelve days of celebration and on the thirteenth day families leave their homes and picnic outdoors. 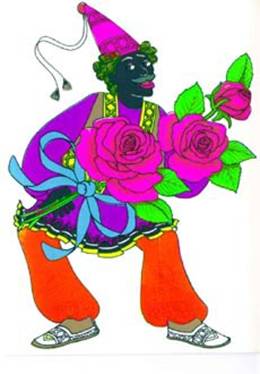 A major tradition of Norooz is the preparation of an elaborately prepared spread known as the Haft Seen - the seven S s, seven items starting with letter S or sîn (س) in Persian alphabet, which are seven specific items corresponding to the seven creations and the seven holy immortals protecting them. Today they are changed and modified but some have kept their symbolism. Every family attempts to set as beautiful a Haft Seen table as they can, as it is not only of special spiritual meaning to them, but also is noticed by visitors to their house during Noroozi visitations and is a reflection of their good taste.
The following list is an example of some common Haft Seen items, though there isn t consensus as to which seven:
• samanu - a sweet pudding made from wheat germ (symbolizing affluence)
• sîr - garlic (medicine)
• somaq - sumac berries (the color of the sunrise)
• sonbol - the fragrant hyacinth flower (the coming of spring)
Other items on the table may include:
·

• lit candles (enlightenment and happiness)
• a mirror (amplifier of light/fire)
• painted eggs, perhaps one for each member of the family (fertility)
• a bowl with two goldfish (life, and the sign of Pisces which the sun is leaving)
• a bowl of water with an orange in it (the earth floating in space)
• a holy book (e.g., the Qur an, Bible, Torah or the Avesta) or a poetry book (almost always either the Shahnama or Divan of Hafez)

The 13th day of the New Year festival is Sizdah Bedar; a day of festivity in the open, often accompanied by music and dancing and the playing of games and sports. It is a must to spend Sizdah Bedar in nature. It stems from the belief of the ancient Persians that the twelve constellations in the Zodiac controlled the months of the year, and each ruled the earth for a thousand years. At the end of which, the sky and the earth collapsed in chaos. Hence, Norooz lasts twelve days and the thirteenth day represents the time of chaos when families put order aside and avoid the bad luck associated with the number thirteen by going outdoors and having picnics and parties.